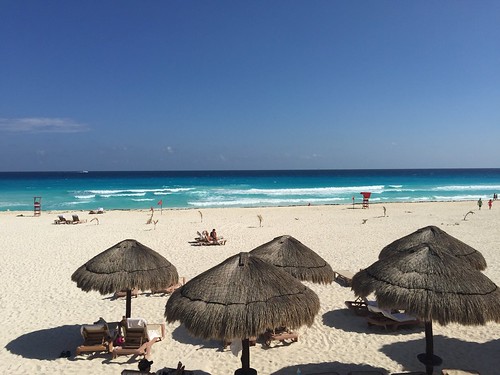 Last weekend I was in Cancun for the wedding of one of the co-founders of Uvamo.com, a new P2P insurance company that I am involved in. It was my first time in Cancun and I had a good time there: the resorts are top class and the Caribbean sea beach is amazing (see for some of the pictures of the trip this set on my Flickr page). It’s not the real Mexico of course, but that’s probably an important reason why many tourists come to this place. They look for a safe and relatively cheap place for their beach holidays, and that’s what Cancun provides them. Most never seem to leave their hotels or resorts and when you travel to local markets in Cancun city you hardly see any tourists. 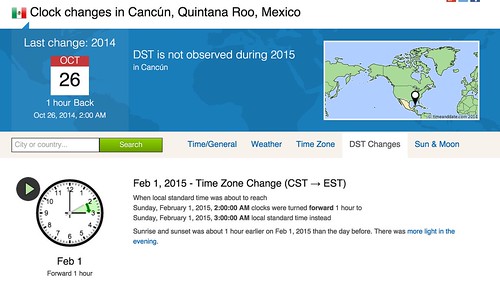 Cancun is so focused on tourism that the place decided to change its timezone during the time we were there (not just Cancun, but the whole state of Quintana Roo): in order to make it more convenient for tourists from the US east coast they changed from CST to EST, meaning that the clock was set one hour forward. This time change happened in the night from Saturday to Sunday, the night we had the wedding party.

The next morning I woke up, looked at my phone and then my watch and realized they were showing the same time. I had not changed my watch yet, however, so that should have shown a different time (my iPhone always changes time zones automatically). I checked with some friends and it turned out that all iPhones had the same problem, and that Apple’s timezone database did not include the Cancun time change. When I turned on my laptop it also still showed the old time in Cancun, meaning that it was actually an hour later than the time on my laptop. I manually set the time on all my devices to New York, so at least I would not make any mistakes. 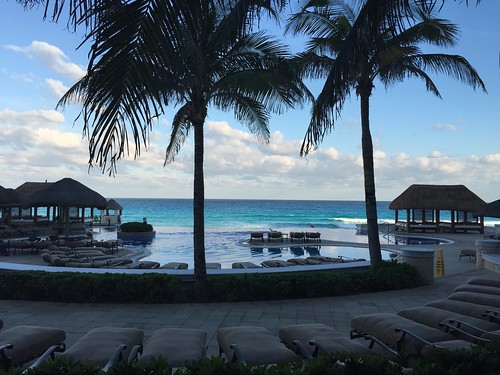 This can cause a lot of problems though, because people rely on their mobile devices for the time. As long time readers of this blog may remember, the same happened to all iOS devices when Russia changed its time in 2011. Because of that I actually missed a flight from Moscow to Cyprus and because I did not have a visa for Russia I ended up in a hotel room jail for a night…

It surprises me that Apple doesn’t have access to a reliable time zone database that updates the times on its devices if countries decide to change time zones. Actually, I just realize that even Google gets it wrong when you Google the time in Cancun, it still thinks that the tourist place is based in the Central time zone. Is there is still no service or company that can provide reliable time information in 2015?