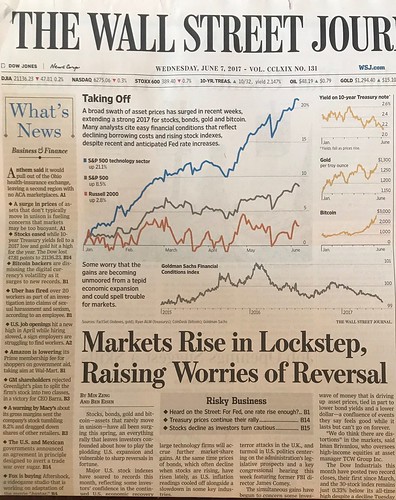 Over the past couple of months the Bitcoin price exploded, from around $1000 in early January to almost $3000 earlier this week. The price increase not only leads to more people being aware of the cryptocurrency, but also to mainstream financial media taking it more serious. This morning I was very surprised to see that the Wall Street Journal casually mentioned on its front page the four asses classes stocks, bonds, gold and bitcoin! That is huge, as far as I know that has never happened before. Bitcoin has come a long way, happy to see it’s becoming a lot more mainstream.

Going to the Business & Finance section of today’s WSJ, my surprise got even bigger when I saw the title of the main article on the front page of that section “Bitcoin Trades Full Speed Ahead”. Wow… For years I have told people why Bitcoin won’t go away, why it is so valuable, and why people should invest 5% of their net assets in it. For years most people did not want to listen, but at least the ones that listened made incredible money on their bitcoin investments. And then all of a sudden the WJS puts bitcoin in the same league as stocks, bonds, and gold! This really made my day. 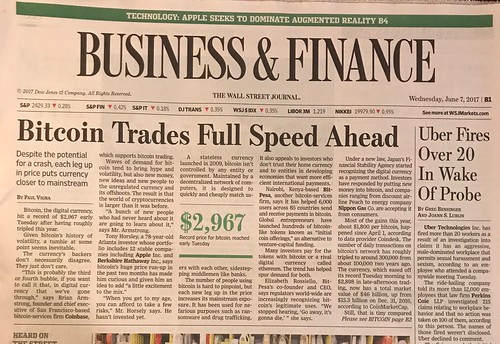 By the way, I still believe bitcoin is undervalued and the bitcoin price will go up a lot more. If you follow my Twitter feed this is no news to you, I have been telling people for years to keep buying bitcoin and also told them to buy Ethereum and Ethereum Classic in early February (people who did that made $15,000-$20,000 for every $1000 they invested – in just 4 months).

But what will happen to the bitcoin price now that it’s at almost $3000? Is this a bubble? I wrote an article about this earlier this week to the investors in First Block Capital, the management company that runs several bitcoin and altcoin funds. I copy/paste the article below with some small changes to avoid that this is seen as marketing for our own funds (it is not of course, it is my personal opinion that anybody can agree or disagree with).

Since we closed our investment round in late April the cryptomarket suddenly went into exponential growth mode. Bitcoin grew from $1360 in late April to about $2700 in late May, before bouncing back to about $2000 and then growing back to $2900 at the time of writing (June 5). Altcoins have seen even stronger growth, with not only the smallcap coins but even some of the larger coins such as Ripple, Ethereum, and Ethereum Classic exploding in value. Daily price increases of 30-50% were not uncommon for some of these coins during this period.

What is behind this trend, specifically for Bitcoin? Is it a bubble? Yes and no, growth rates of consistently more than 10% per day are highly unusual and normally a clear sign of a bubble. That’s why I was quite happy to see Bitcoin go down 25% in 2 days around May 25. After this cooling off period slower growth started immediately, showing that nobody had lost appetite in Bitcoin yet. After about a week the price was back at $2500 and then over the past 2 days the price started increasing with about 10% per day.

The reason for the fast growth is simply supply and demand. The bitcoin supply is fixed at 21 million coins, and currently about 16.4 million coins have been mined. The rate of growth in coins is decreasing and only 4.6 million more will ever be created. At the same time more people hear about Bitcoin. People who may have dismissed it a few years ago are surprised Bitcoin is still around and growing faster than ever. Suddenly they realize they may have been wrong all along or they may still not get it, but want to at least hedge their bets. So they want to own a Bitcoin themselves. When not enough new coins are created and nobody is selling (most Bitcoin holders are so called HODLers – they “Hold On for Dear Life” in the Bitcoin rollercoaster) the price will automatically go up until someone feels enticed to sell.

And what happens if the price goes up? More people hear about it and want to own a coin as well, leading to even faster growth. This is what happened in May and what will happen very soon again. There are just not enough coins available and demand is going through the roof. Bitcoin exchange Coinbase added 400,000 users just in May this year. The average waiting time to get approved by an exchange is up to 3-4 weeks for most exchanges. All these people will talk to their friends after they made 20% profit in just a few days, and then some of their friends will want to get into the game as well.

A bubble, yes, but not an unsustainable one. Look in your direct circle of friends or family, likely most of you will not have more than 2 or 3 good friends or family members that hold Bitcoin. That means most people you know have not even thought about buying coins, let alone really bought them. That’s not the sign of a bubble. Institutional money is not even in the game yet, simply because most funds can’t invest directly in Bitcoin (we are working on solving that!). Or think about it this way, the US has about 11 million millionaires. If all of them wanted to have just one Bitcoin that would be impossible. There are only 4.6 million coins left, prices would likely have to go into the hundreds of thousands of dollars per coin to convince enough people to sell.

Some people may say that Bitcoin prices of $2500 are crazy, but I don’t agree. I have been in the market since prices were below $100 and each time the price hit a new psychological hurdle people said that Bitcoin was overpriced. At those lower prices I was never fully convinced whether Bitcoin would make it and whether the prices reflected the real value of Bitcoin. But the longer Bitcoin survived, the more I realized how resilient it is. Now that the public is finally waking up to Bitcoin I believe the currency is suddenly very undervalued. I have seen the fast growth from $100 to $1000, I have seen the crash from $1000 to $200, followed by the slow growth back to $1000. I have then seen the fast growth from $1000 to 3000, I am now fully convinced we may see $5000 quite soon and potentially even $10,000 later this year. And after that? Nobody knows. But if Wall Street gets into the game and if people really start treating Bitcoin as digital gold prices of $100,000 or more are very well possible. We will get lots of crashes in between, it won’t be straight growth. But keep in mind that you should HODL – don’t sell your coins in a sudden panic wave of sell orders.

There are still some risks, but they are getting smaller. The biggest risk is still how to keep your coins safe, and that is what First Block Capital will help its investors with. Later this month we will go live with a campaign on FrontFundr so Canadian retail investors can invest in Bitcoin as well. A self fulfilling prophecy? Partly, but a prophecy in which I believe completely.

Next time some more information on some of the major alt coins that we plan to invest in through our hedge fund and what I see happening there. Always feel free to get in touch with remarks or questions and keep in mind I intentionally left a lot of information out (Segwit and Hard Fork anyone?). Happy crypto investing!