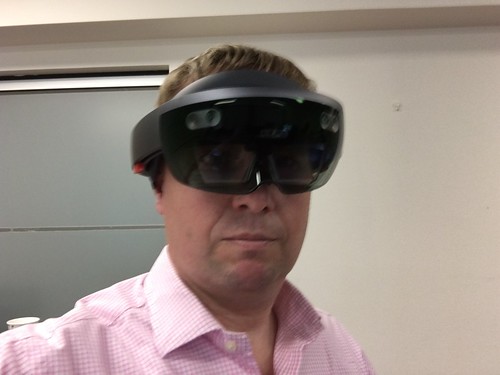 This week I had the opportunity to try out the latest virtual reality (VR) and augmented (mixed) reality (AR) devices. I have been following VR and AR closely for the past couple of months so I was quite excited to experience devices that had just come onto the market or are not even available to the public yet.

Rod Furlan invited us to his downtown Vancouver office to try out his devices. Rod is an investor and entrepreneur, working on building the operating system of the Metaverse, basically a massively-distributed 3D simulation engine to power the vast network of interconnected virtual worlds. If you read Ready Player One you can think of that as a kind of OASIS, and Rod would be James Halliday (he likely won’t agree because OASIS was owned by a company and his system is open source). And if you have not read this book you should read it before Steven Spielberg’s movie comes out (filming just started)! 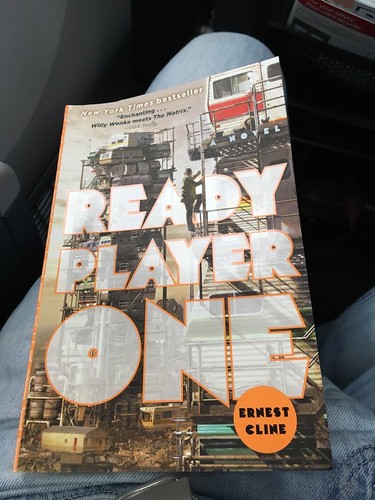 Rod is obviously a big fan of virtual reality and he is probably the only one in Canada right now with a HTV Vive, a Samsung Gear VR and a Microsoft Hololens in his office. The gear takes up so much space that he is now looking for a new home for his telepresence robot (send me a message if you’re interested).

In case you don’t know the difference between VR gear and AR gear, it’s mainly that the headgear for VR is completely closed off (you can’t see the real world anymore) and for AR the glass is transparent and objects are projected in the real world. The Vive and the Gear VR are both VR devices, the Hololens is an AR device.

We started with the Vive. The headset is quite heavy and you are connected with a cable to a powerful PC. I assumed that would be annoying, but once you put on the device you forget about it and you are in a different world. It takes a few seconds and then the presence sets in and you forget where you really are. It’s much better than the Google Cardboard that I have at home and in the office. 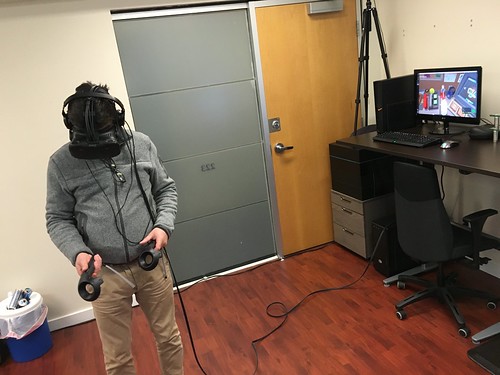 The graphics are quite good (not real life good yet, but that actually doesn’t really matter) and if you move around quickly there is no noticeable lag. The Vive was in a virtual office environment where you could check email or pick up a phone, with the help of the controllers that represent your hands. That works extremely well, you really see your hand in the simulation and you can pick up anything (and drop it on the ground if you let it go, I tried it out).

I could consider buying a Vive if more people would have one and so I could be in the same world with them. Now I understand why Facebook bought Oculus Rift last year for $2 billion. The future Facebook will be in virtual reality, you will be able to see your friends and interact with them, instead of just reading their status updates. Location, distance and time won’t matter anymore. I suddenly saw the future and it will be amazing. Maybe I should buy some Facebook shares again? Or should I spend the money instead buy a few sets and give them to my family and friends?

The problem is of course that not everybody can afford to spend $2000 for a high end system (headset plus PC) to run the applications. For sure this will become much cheaper over the next years, but in the mean time there are other solutions. One of them is the Samsung Gear VR, which uses an Android smartphone as its processor. Like in Google Cardboard you put a smartphone in the headset and you are done.

After the Vive the Gear VR is a bit of a step down, but it is still a great device for just $139 (plus a Samsung smartphone). Because there are no controllers yet you have to use your head to give commands (we played a game in outer space where you shoot enemy spaceships while you fly through the galaxy), which is a bit awkward at first. However, you also have the presence like you have in the Vive. I could imagine buying one of these devices to watch movies on long plane rides or even at home (there is a Netflix app that you can use). It may look a bit weird, but I think this might become the new normal until the devices get smaller. 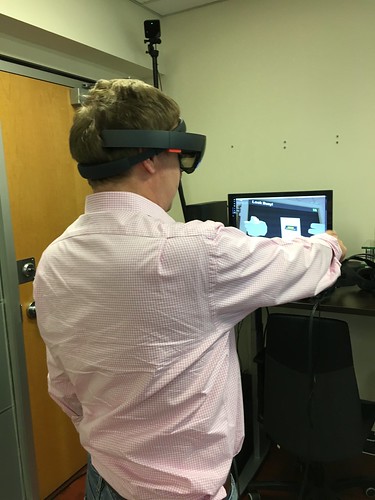 Then we moved from VR to AR and tried out the Microsoft Hololens. The headset is much lighter and because it’s transparent you don’t have the presence that you get with VR. However, it means you can stay in the real world and still interact with the people around you. Rod had prepared an environment for us in which he put up several virtual computer screens in the air and even an astronaut in a space suit.

With the Hololens you can interact with these screens or objects. That means that in the near future we won’t have big screens on our desks anymore or even just have one laptop screen in front of us. You can create as many screens as you want and interact with them. This gives huge opportunities for work environments, but also to create your own private environment that nobody can see. Here I suddenly saw the future of work. A Hololens device is not as intrusive as the Vive or the Gear VR, so  you can wear it for a much longer period of time. The moment you put it on you are in your own environment, wherever you are! Imagine going on holiday and bringing your office to your hotel room. Well, most people may not like that idea (I do though!), but you probably get my drift.

After this demo I am 100% convinced that VR and AR will replace computers and eventually smartphones. The headsets are still too expensive and too clunky, but that will change. I think it may become acceptable to wear these devices, first inside offices and homes and later also at home. They may become as small as sunshades, although batteries may be an issue for that form factor.

With VR you won’t need to travel as much anymore, because most meetings can be done in VR as well. Given where VR is now I even think that you could take short holidays with VR. That may sound really weird, but if you try it out you may understand what I mean: VR transports you to a different world and you literally forget where you are. If you add a few more senses (right now it’s just video and audio), such as temperature, wind and potentially smell you can literally go to a tropical rainforest or the top of Mount Everest for a few minutes. It’s hard to imagine what life will be like 10 years from now (because that’s how fast this will go).

What else will change? I believe that with VR and AR you can literally work from home while you are in a virtual office with other people. You don’t have to be in the same physical location anymore, meaning that I can build a house on an island or go sailing on my boat and work from there. For entertainment everybody will have their own IMAX theater with them all the time. Or you can travel to any location in the world and experience it without leaving your seat.

Or one step further, you will eventually be able to travel to the past as well. I think people will recreate important moments in time, so you can experience them as if you were there. That seems like a difficult thing to do right now, but the tools to make them will get exponentially better and artificial intelligence will likely be able to help here. If I see what my 8-year old son can make in Minecraft now already (just on his iPad!) there is no doubt in my mind that by 2025 we can time travel with our own VR devices.

Education will change completely because of this. Schools now already use Kahn Academy for junior school students for math and other subjects (Scott loves it because he earns points and tells me during dinner how many points he got). But that’s just on his iPad. I believe that by the time he finishes school many of his courses will be in VR, with teachers that are not in Vancouver.

He will be able to experience history by watching important events like D-Day by sitting on the Normandy beach watching the allied soldiers run from their landing craft onto the beach. Or learn geography by traveling to any location in the world to experience it. In chemistry he can play around with molecules or atoms in AR to create new structures and see how they behave. Things go so fast, even without VR: this weekend he was composing a tune in Garageband on his iPad while sitting ont he couch (in his school they use Garageband for music), and it sounded great. When I was 8 years old I could hardly play the flute!

I could go on and on about this, because I am super excited about the future. I believe all politicians should at least spend 2 hours trying out these devices to understand what they can do and how they will change the world. With VR we won’t need to most physically travel anymore and if we do we can use VR while we sit in our autonomous vehicles. Office towers in city centers will be half empty and land or houses far away from cities will become more valuable, because you can work from there as well with an AR device.

I think VR and AR will eventually merge to some sort of New Reality (NR). NR just means being in a different virtual location than the physical location you are at. Can you imagine going sailing across the ocean and attending a rock concert while sailing? Or giving a speech to a group of students while you are days away from the nearest coast line? With NR location will become irrelevant – until your Internet connection stops working.

The future is almost here and I am happy that I had the opportunity to experience it. I wish everybody could see this for themselves, but that’s not possible yet. I think we’ll see the first VR ‘cinemas’ or ‘Internet cafes’ fairly soon, it’s a big opportunity that people don’t seem to be grabbing yet in North America (I have seen some applications in Australia and Asia). I also think Apple will come with its own iPhone VR device and when that hits the market everybody will suddenly have a chance to experience VR. Last week I saw a demo from a Vancouver company that developed an AR device based on smartphones for less than $200. The idea is great (it’s based on this concept) and if they manage to pull it off it may be the first AR experience for many people.

If you have not experienced VR or AR yet, try to get the experience. It will change your view of the world as it is. I am actually thinking about buying a few devices for our office so we can demo them to guests. Or maybe set up a dedicated VR/AR room for interested people and charge them a small fee to pay for it? The entrepreneur in me is waking up again… But I am a VC now, so I try to just fund companies instead of setting them up. Get in touch if you have the next big idea in VR or AR!