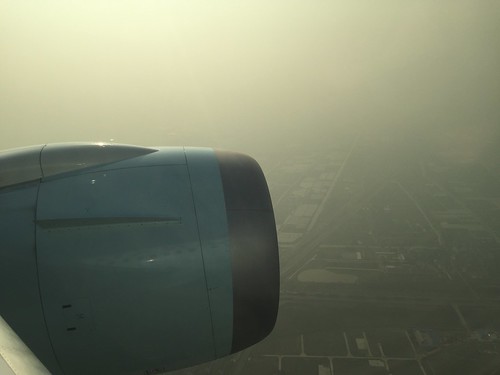 I am on my way back to Vancouver after spending a week in China. The main reason for my trip was a Dianrong board meeting in Shanghai, but I also had another couple of meetings and I took a few days off in Beijing.

I always love to be back in China, the vibe there is amazing and things just ‘happen’ there. Valuations of companies that friends started after we left Vancouver are going through the roof and sometimes I regret a bit that we did not stay. Don’t get me wrong, Vancouver is amazing and I am super happy living there. But businesswise North America is just on a different level from China, things don’t move as fast (even in Silicon Valley!). China out-innovates the US with incremental innovation (making continous small changes to products), but Western media still describe China as a copycat.

Each time I am back on the mainland I think about whether one day I should move back to Shanghai or Beijing. If it would be purely for business reasons I might consider it, because there are simply no better places in the world to do a start-up. However, there is a lot more to life than just business, and after the past days I realize I will likely never be able to move back. The problem is that I love China, but I also seriously dislike it at the same time.

Things have changed a lot since we left 3 years ago. With taxi apps like Didi Dache and to a lesser extent Uber life has become a lot easier if you don’t have a car with driver. 3 years ago deliveries were big already, but now it seems that everything is just a mobile phone click away from being delivered. It’s super convenient and I don’t see this happening soon in Vancouver (even the San Francisco Bay still has a lot to learn from China). For example, when you search for a restaurant on Dianping you can not only make a one-click reservation but you can also get a car to pick you up through the integration with taxi apps, and you can pay in-app for the car with WeChat or AliPay.

Of course WeChat is ubiquitous. When we left it was still mainly used for chatting and making calls, but now it seems that most of the Chinese Internet has moved onto WeChat. It’s basically a second (mobile) Internet that you can hardly live without. Paying with WeChat is completely normal and every company seems to be integrated with the service. You can do anything you want within the WeChat app, from booking a doctor’s appointment or a taxi, to ordering food or even automatically investing your savings on a p2p platform. Facebook Messenger has a lot to learn from WeChat.

But what also has changed is that the pollution seems to be a lot worse. In Shanghai the air was relatively clean, but when I took the bullet train to Beijing things started to change. Upon arrival in Beijing I started to cough right away and that did not stop during my whole stay there (even now on the airplane I am still coughing). We had our house covered in air purifiers and we did not open any windows during our stay there, just to keep the pollution out.

Inside we managed to get the AQI down to about 30-40 while outside the readings were hazardous on 2 consecutive days (AQI over 350). I really wanted to run but I worried that it might make me physically sick. My family all got sick during the trip, from coughing to losing our voices and even slight fevers and headaches. I actually wondered if we should still take holidays in Beijing when the situation doesn’t improve. If you stay longer in Beijing you get used to it and the coughing normally stops, but with our clean Vancouver lungs you feel the effect immediately.

Internet is also a big problem. 3 years ago a lot of sites were blocked but you were able to get around the restrictions fairly easily with VPNs. At that time the government generally just wanted to make it a bit harder to get onto blocked websites, but nowadays it’s almost impossible to get on Facebook. Most VPNs don’t work anymore, and it’s hard to know in advance which ones to install before you fly. Through a former Tudou colleague we were able to get our hands on a good one, but even that one stopped working regularly (especially on mobile). I find it more and more annoying that I can’t access my gmail without a good VPN anymore, or that uploading to Facebook fails half of the time. Maybe the situation in Beijing is worse than in the rest of China. At least my hotel in Shanghai had a built-in VPN so you did not realize that you were accessing the Internet from China.

For some reason Chinese 4G cards don’t seem to work with Canadian iPhones. So on the 3 iPhones that I had with me I was only able to get 2.5G… Using public wifi is a hassle and often doesn’t work with VPN connections. Most public wifi connections need you to input your mobile phone number to receive a SMS (for censorship purposes) and in the business lounge at Beijing airport I even had to scan my passport in order to get a wifi code (a code that did not even work!).

Traffic has not improved either, but it’s something I was prepared for. I decided not to drive in China anymore a few years ago, I still have my driver’s license but I prefer having a driver. Driving myself literally drives me crazy. While Shanghai is still reasonably okay (except for rush hour), you can’t do more than 2 meetings a day in Beijing anymore because driving from one meeting to the other can easily take 1.5 hours. At least it’s easier now to get taxis because of all the apps, but tourists are out of luck: most taxis don’t seem to pick up passengers on the street anymore but only rely on apps where they people can bid to get a taxi faster by paying a few more renminbi. Except for Uber (which doesn’t have a lot of drivers) all apps seem to be in Chinese only.

I had a good time in Shanghai and Beijing but I realize once again that the decision to move to Vancouver was the right one. Making potentially more money in China is nice, but the clean air and the beautiful nature in Vancouver are more important. It may add many years to my life (knock wood, praise Murphy).

I better understand now why so many Chinese are buying properties in my new hometown. And given the extreme property prices in China’s big cities the prices in Vancouver are still quite reasonable. The local Vancouver papers complain on a daily basis about how expensive properties are, but compared to Beijing  houses and condos are still relatively cheap. I believe that prices have a lot more upward potential. That’s just the price you pay for living in one of the best places in the world.

So it’s highly unlikely I would move back to China, unless there would be some major changes. I had hoped to see some of these changes over the past 3 years, but nothing seems to be happening yet. I think electric vehicles may be able to solve big part of Beijing’s pollution over the next years (electric vehicles should be the same price as gaspowered vehicles by 2022), and autonomous vehicles will help to solve many traffic problems. As for the Internet, I have no high hopes for any positive change, it only seems to get worse. I guess I will just have to use Chinese websites and apps when I am in China and forget about Facebook, Twitter and Google until I am back outside the Great Firewall…