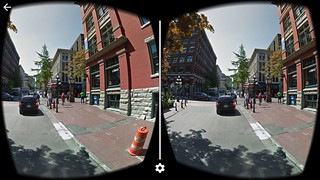 It seems as if all of a sudden virtual reality is making a breakthrough. I have been reading about VR for years, but over the last few months several cheap VR players suddenly came out and new players are announced literally every week. At first I thought the VR hype would not start before the consumer version of the Oculus Rift would hit the market, but even before that product is out VR seems to be everywhere already.

A couple of weeks ago I bought a Google Cardboard to check out VR in more detail. Google Cardboard is just a piece of cardboard with some lenses in it, in which you can insert your smartphone (both Android and iPhone work well). You put it together in 3 minutes and are ready to go.

Once you have this you realize how much content is out there already, especially in video format. There are some pretty good VR films available. If you decide to order a Cardboard (or any other VR player) make sure you try out the New York Times Virtual Reality app (see here) which has some excellent films. 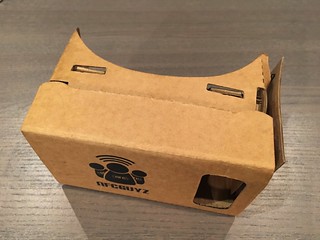 The NY Times distributed 1 million Cardboards to their subscribers, so they have a big incentive to distribute good content. Put on your headphones and watch The Contenders for example, a film in which you are in the crowd during US presidential candidates’ rallies. A more sophisiticated film is Take Flight, which is very well made and really put me in a different world. My kids loved it as well, they kept on watching the movie while screaming ‘I’m flying’!

There are also quite a number of VR games in the Apple store, but most are underwhelming. Romans from Mars 360 is fun to play, but I actually still prefer playing normal games. Same for my kids, once the novelty wears off they go back to normal games. However, I think that may change with dedicated VR devices that have a lot more computing power and will likely be easier to control.

What’s fun as well is Google Streetview in VR. You need to get the Google Streetview app for this (Google Maps is not sufficient) and then click on the Cardboard button to get into VR mode. Pretty cool to go check out some well known locations and look around as if you are standing there. What’s still missing (at least I could not figure it out) is how I can literally walk around. If I move forward I want to be able to walk in that direction in Streetview, but that doesn’t work yet.

I think Cardboard is a good way for people to try out VR for the first time, because it’s cheap and they can just use their smartphone to consume content. However, from what I have been hearing, the Cardboard experience is nothing compared to using a dedicated device like the Oculus Rift. Will people be willing to pay hundreds of dollars for a ‘real’ VR headset if they already have a Cardboard?

I think it will all depend on the content. It’s fun to watch VR movies in the NYTimes app, but the Oculus Rift content will be so much better that people can be convinced to upgrade to another device. That will take a while though. Not only is the Rift not out yet (it will launch in late March this year), but there won’t be a lot of content initially either. Next to that the Rift is very expensive ($ 599), but you will also need a very fast computer to just use it (most people won’t have this and will need to shell out at least another $1000, and probably a lot more). I expect prices to come down quickly though.

We’re at a tipping point for VR. In a few years we’ll likely laugh at what we now call VR, especially after the first Augmented Reality devices come on the market (Magic Leap and Meta will open up a whole new world of possibilities, it’s hard to imagine right now). But for now watching movies in virtual reality or playing games by moving your head is pretty cool. I love how technology keeps on changing the world!