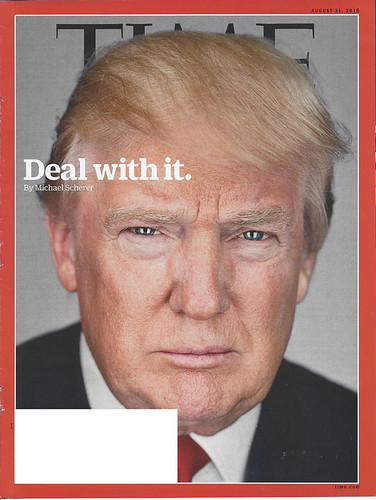 I normally don’t write about politics on this blog. It doesn’t really interest me. Politics is a game to me, a game by people who are good at playing games, but not necessarily at ruling a country. I’m not a big believer in democracy anymore, I would prefer to see a country being run like a succesful multinational. Don’t elect people every 4 years, but let them grow from within into leaders that have a long-term vision, instead of only going for short-term results with slogans that sound good but have no real meaning.

That doesn’t mean that succesful business men are per definition good at leading. Some certainly are, especially ones that are decisive but can also work together with others to achieve their goals. But others, such as ones that reach their goals by being arrogant and not caring about their employees, are not the ones you want to see in power. They can be worse than the worst politicians.

To me Donald Trump is the ulitmate example of a ‘successful’ business man who can be extremely dangerous to not only the USA, but to the whole world. This man is a bully who does not care about anyone else, probably not even his own family. That’s what made him his money and that’s fine, but those are the same traits as some of the biggest dictators in the world. I would normally be hesitant to make a comparison to Hitler, but after what Trump said this week about not allowing Muslims into the US anymore, I think a comparison might actually be justified.

I am worried, because this guy is dangerous. The average Republican American doesn’t see it, because Trump’s dumb rhetoric is so simple that they don’t even think about his message. They want America ‘to be great again’, without understanding what that means. A great country does not close its borders, only a scared country. A great country doesn’t discrimate based on religion, especially not a country founded by people persecuted because of their religion. And a great country should be a free country, free for all to enter and free for all to leave.

I write this post after reading some of the comments on Donald Trump’s Facebook page. Reading those comments made me really worried. I know the average Joe generally doesn’t really think much about the world around him, and the comments made that very clear. His thinking is more or less emotional, based on simple messages (that’s why TV ads are so successful) and slogans that can be easily memorized and repeated.

I am worried because Donald Trump knows that and uses the same tricks as advertisers to get these people to vote for him. He wants to become the ‘leader of the free world’, another one of these slogans mainly uttered by people who have never been outside the US. They don’t realize that the US is not a real free country anymore, and has not been like that for a very long time. If Donald would win the elections (still a big if, but one that becomes more likely now that nobody is able to stop him and the masses seem to adore him) and would indeed try to bully the rest of the world, the USA is doomed and we may end up in World War III before we realize it.

I am worried because none of the US business leaders seems to be willing to make a stance against Donald’s racist words. There are some exceptions (Mark Zuckerberg’s note about Muslims always being welcome at Facebook being a notable one), but most companies don’t seem to care.

I am worried because I realize that his popularity is a sign that the US population is unhappy and wants to have a better life. People are looking for scape goats (Mexicans, Muslims) and Trump delivers that to them. I see parallels with what was happening in Nazi Germany. The way Trump talks about Muslims is very similar to how Hitler talked about Jews. The masses love it without thinking about it, just like the Germans during the crisis in the 1930s.

I am worried, because for a long time I thought that what happened in Germany would not be possible in the Western world anymore. Social media and free press would be able to stop it, but that’s not the case it seems. The debates on the Internet are tense, with many people really believing in Trump and completely defending his statements. Not as anonymous trolls, but with their full names and backgrounds on Facebook! How is it possible that people are so stupid that they don’t see what is going on? History is repeating itself and people don’t want to see it.

The other Republican candidates should make strong statements against Trump, because if they don’t the next thing might be that he will tell people that all Muslims should be rounded up. And although that won’t happen in reality, many people may see that as a statement to take their rights into their own hands and a new civil war could start. Far fetched? Maybe, but nobody could have predicted a year ago that Donald Trump would be able to get away with his current statements about Muslims.

I am worried, and I don’t know what I can do about it. I don’t live in the USA, but that doesn’t mean I should just sit still and not say anything. If everybody would do that Trump might eventually really be elected. So at least I want to put my thoughts on virtual paper and hopefully make some people think. Of course I realize that the people who vote for Trump likely don’t have the attention span to read more than a few sentences and would never find or read this post in the first place.

Is this a sign of the times? Real wages have gone down over the past years and that’s a trend that will only get worse. That is one reason why people are angry. Because of artificial intelligence and robotics most people will lose their jobs in the next 15 years (many people still don’t want to see this, but it’s inevitable with universal machines that get exponentially better, faster and cheaper, and won’t just do one job, but will eventually be able to do most jobs).

This will lead to mass unrest, unless visionary leaders take the helm in the US and some of the other big countries on this planet. With people like Donald Trump that won’t happen and the fact that he is so popular and gets away with racism might be a sign of what is to come. I have been contemplating a post about mass unemployment and potential solutions for a long time, maybe it’s time to sit down and write down my thoughts on those topics. They may be more relevant now already than I had realized.