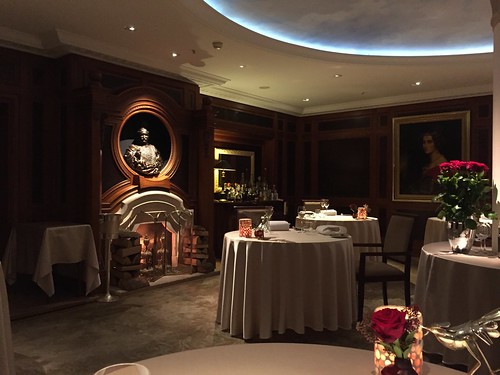 Last week I spent some time in Germany’s capital Berlin. I like the city, it has both great old architectural gems such as the Brandenburger Tor, the Reichstag and the Gedächtniskirche, but also brand new buildings such as the ones around Potsdamer Platz or the new German parliament. 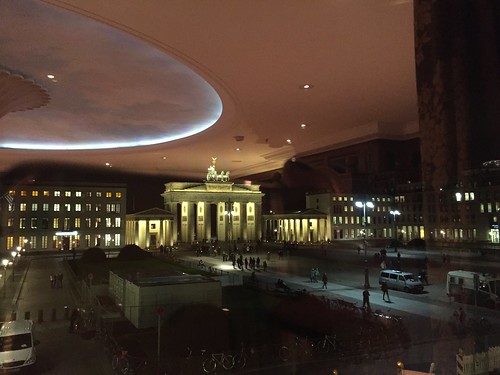 The city has undergone a complete transformation since the fall of the Berlin Wall in 1989, and it’s now often hard to know whether you are in the former East Berlin or in West Berlin. Of course there are still a lot of former communist buildings, for example along the Karl Marx Allee, but even most apartment buildings in the East have been completely renovated by now. The city feels like one city again. 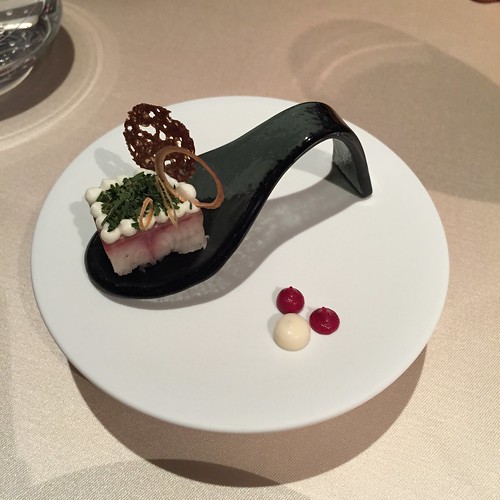 I am a fan of very high end cuisine, the kind of restaurants that you don’t find in Vancouver. Berlin has a couple of “over-the-top” restaurants and so one night we decided to try out Lorenz Adlon Esszimmer at Unter den Linden. The restaurant has 2 Michelin stars, which guarantees you the very best food and service. Problem was that you normally can’t book a table on the day of your dinner, but with a bit of luck and some phone calls I managed the get a table at the window, looking out over the Brandenburger Tor! 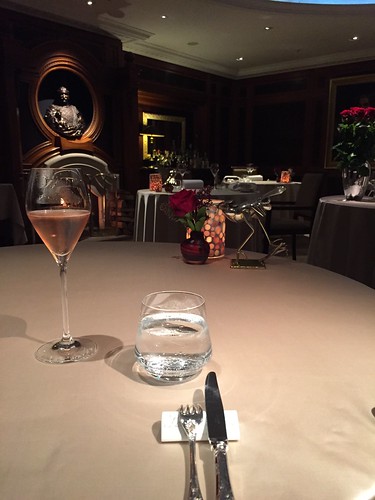 Grace and I arrived at exactly 7 pm and it turned out we were the first guests. The Esszimmer (which is German for dining room) is a relatively small restaurant. There are just 7 tables, set in a beautiful classical setting with a fireplace and windows with great views.

We were welcomed by the head waiter and the sommelier and were given the choice of several Champagnes. To start we opted for a glass of rose Champagne. They then gave us the menu, which had the choice of either a 6-course or an 8-course tasting menu. Because we had no important plans for the next morning we decided to go for the 8-course one with 8 paired glasses of wine (at least for me, Grace stayed with Champagne). 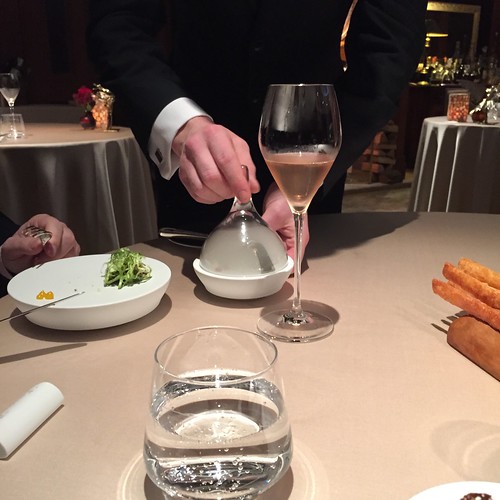 Before the 8 courses we first had 3 rounds of amuses, which gave us an indication of what was to come. Beautifully designed small dishes with amazing combinations of ingredients and aromas. 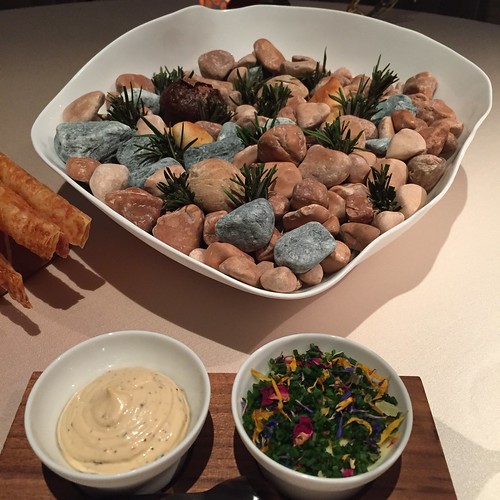 While we were having our amuses the restaurant slowly filled up. Most tables were just 2 people, but one table was set for 4 persons. There was also one table for a single person. Most of the guests were in their 50s and 60s, and all were well very well dressed. That’s what I like about this kind of restaurants, having dinner here is a special occasion, even for people who eat more in restaurants than at home. 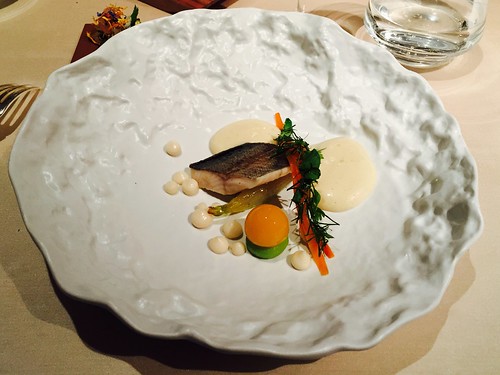 The 4-person table turned out to be 2 older gentlemen and 2 young good looking Thai women. A bit of a strange combination of course, but who am I to judge. They spoke English and some German among themselves, and I didn’t think much of it until I realized that the accent of the men was Dutch. I took a closer look at them and then realized that I actually knew one of the men. He was a well-known former CEO of a large public company and I actually had had a business meeting with him once. (Given that the Thai girl was not his wife I won’t mention his name here.) 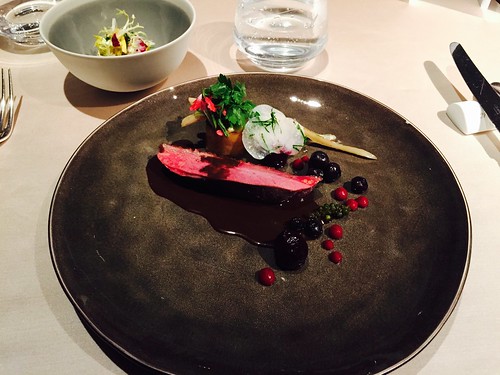 He looked at me as well, but I think he could not place me. He certainly did not realize I was Dutch, because after a few glasses of wine the 2 businessmen switched to Dutch. They talked quite loud and I could understand everything they said. Unfortunately the topics they discussed in Dutch mainly involved their accomplishments with young women. I am not easily embarrassed, but some of the things they said I really did not want to hear. I am sure they would have never discussed these topics in either German or English in this setting. For a moment I considered walking by their table and making a remark in Dutch to show them they were not the only ones speaking that language, but in the end I just let it go. The details sure make for a nice story over beers with friends in the future (most Dutch people know his company). 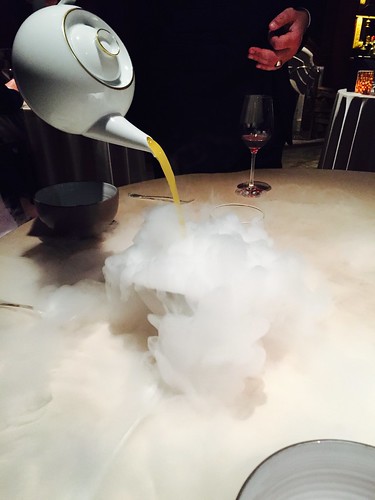 The dinner itself was fantastic and the wine pairings were excellent. The creations were like art on dinner plates and they tasted even better. Top chefs are really highly skilled artists! Some of the dishes reminded me a bit of Ultraviolet in Shanghai (which is still my #1 restaurant in the world). The wines were mainly European ones and there were some real gems in there. What I like is that they give you decent sized glasses and every now and then refill your glass if you really like the wine. Not every top restaurant does that, but in this price range (about EUR 700,- for 2 people) I like it if they are not stingy. 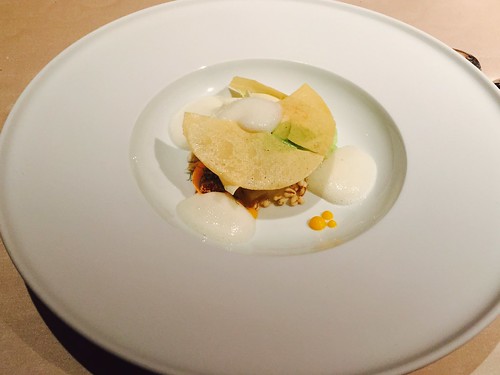 The only downside was that it was almost too much for me, and Grace stopped eating her full portions after 4 courses already. You actually should not eat more than a soup and a salad at lunch when you know you’ll be having a meal like this. 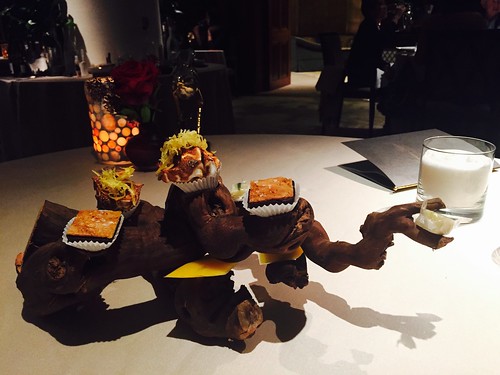 I had a fantastic evening at Lorenz Adler’s Esszimmer. The combination of the food, the wines, and the view was just perfect. Observing the Dutch business people actually added to the fun, although it was difficult to ignore their loud talking sometimes. If I would live in Berlin I would probably go here at least once a year on a special occasion. I highly recommend this restaurant if you’re a foodie and don’t mind spending a lot of money for an amazing meal in a great setting. Just make your reservations well in advance! 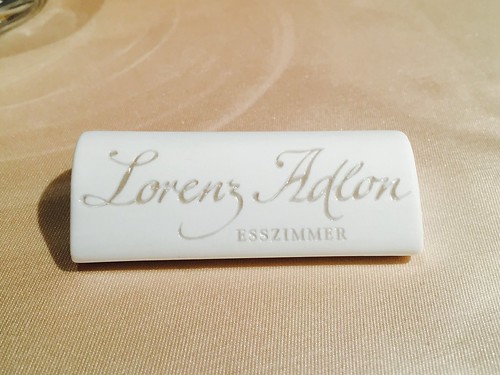