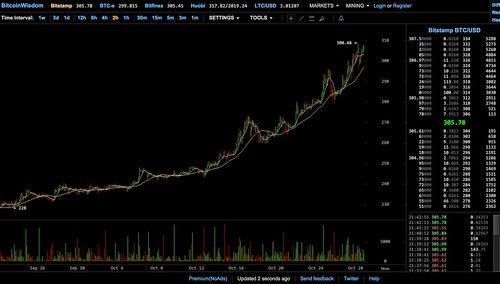 I stopped following the Bitcoin price on a daily basis a couple of months ago, mainly because not much was happening to the price. I still read the analyses on the Internet and in Bitcoin chat groups on WeChat and Telegram, but I was waiting for a a big event to happen before Bitcoin would get into a major uptrend again.

That uptrend started just over a month ago, and since then the price has gone up by about 35%. Not a lot compared to the price increase 2 years ago, but very different from the boring horizontal price trend that Bitcoin has shown for most of the past year. There were 2 other rallies in February and in June/July, but this month’s price increase seems much more stable. No big up and downs, just a steady growth of 1-2% per day at much higher average volumes than we have seen since the Mt. Gox crash in early 2014.

But what caused this price increase? There was a chain of separate events over the past weeks that explains why Bitcoin is becoming more prominent again. I list the reasons below, with the most important one at the bottom.

– MMM Global Republic of Bitcoin: This is a ponzi scheme from Russia that is suddenly becoming very popular, especially in South Africa and Indonesia, but also in China. It promises people returns of 100% per month, which should be a clear sign that it’s a scam… The interesting thing is that people don’t transfer money in fiat currency anymore, but that they switched to Bitcoin. So a lot of people are starting to use Bitcoin now for the first time. I don’t think this has a big effect, but it could lead to a lot more people finding out about Bitcoin. Of course when the whole scheme eventually falls apart they will blame Bitcoin, even though the cryptocurrency has nothing to do with it.

– The European Union announced that Bitcoin is VAT-exempt, meaning that you can legally buy and sell it without having to pay tax on it, just like any other currency. This kind of news shows that governments are getting a lot closer to accepting Bitcoin as money and it gives people more confidence in the future -and the future value- of Bitcoin.

– Several money transfer companies that use the Bitcoin blockchain to instantly send money from one country to another have launched over the past months. I think this is the next big thing for Bitcoin, even though most people using these services won’t realize at first that their fiat currency to fiat currency transaction actually takes place over the Bitcoin blockchain. Companies to watch in this space are Abra, Coins.ph, Bitpesa and ZipZap, but many more will likely appear over the next 12 months. Banks will likely also get into this space as well, although they may not use the Bitcoin blockchain at first. If you have shares in Moneygram or Western Union it’s probably time to start selling them.

– NASDAQ is launching a private shares exchanges using the blockchain. This is a clear validation of Bitcoin technology and might eventually lead to NASDAQ using the blockchain for all its transactions. That will take a while, but this announcement came a lot quicker than I had imagined.

– The most important reason for the increase, however, is China. I was just watching all transactions happening on the major exchanges in the world, and about 80% of all Bitcoin transfers took place in China. This reminds me a bit of what happened exactly 2 years ago, during Bitcoin’s first mega rally. China led that rally until the government stepped in with a warning. Bitcoin was never banned, however, and the biggest Bitcoin exchanges in the world are still in China. It seems that more people in China have (re)discovered Bitcoin and are using it either as investment or as a tool to get their assets out of the country. The recent devaluation of the Renminbi was a sea change for China’s monetary policy. It was followed by a increased capital controls, including a crack down on underground banks and money transfer agents, making it even more difficult for money to leave the country. It seems therefore likely that Chinese are now increasingly using Bitcoin to transfer money out of the country, and I believe this is what is mostly driving prices up at the moment.

I stopped speculating about the Bitcoin price a long time ago, but looking at the volumes this seems like a very healthy uptrend that may continue for a while. On the other hand, if China suddenly decides to crack down on Bitcoin (hard to do, but still possible) prices may suddenly crash back to the lower 200s. I don’t really see that happening though, so I would not bet against Bitcoin right now.