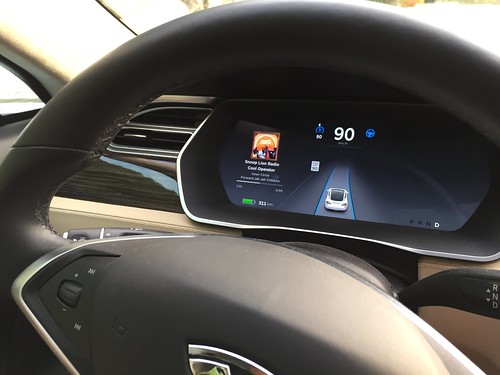 I am a big believer that the near future will be full of self-driving cars. So Tesla’s announcement this week that it would roll out its first self-driving features in a software update to its cars was super exciting.

My business partner’s wife drives a Tesla Model S P85D (the one with the insane mode, going from 0-100 km/h in just 3.1 seconds) and her car received its autopilot update on Friday morning. Because of my Facebook posts about autonomous driving they dropped by my house today to show me the autopilot’s features. Of course I made some videos and I uploaded one here on Youtube.

Once you drive over 30 km/h you can turn on autopilot (by pushing the cruise control handle twice). At that moment the car keeps on driving the same speed (like in cruise control mode), but it also starts steering for you. On the highway that works very well and the car keeps its lane and adapts its speed to other cars in the same lane.

Also passing other cars is easy, you just turn on the your signal light, then the Tesla will check if there are no cars close to you and move over to the next lane.

It start getting tricky if you get to an area with construction though. At that moment the car gets confused, gives a warning and you have to immediately take over manual control. The current version of the Autopilot software is far from ready to drive through a construction area, and that’s kind of scary.

On secondary roads it’s even worse, because many streets don’t have outside lines or the middle lines are too faded. We had quite some problems using the autopilot features on two-lane roads and one time we even started to drive into the lane with oncoming traffic! Also the autopilot doesn’t recognize stop signs (they are everywhere in Canada) and traffic lights yet…

To be fair, the software is only in beta version and you should actually keep your hands on the steering wheel at all times. If you do that you can turn on autopilot on non-highways as well, but what’s the use of autopilot software if you still have to pay attention to the road?

My conclusion after a short test drive is that this is a major step forward in the direction of autonomous vehicles, but that this software is not ready for non-highway use yet. Maybe it’s useful in traffic jams downtown, but for now I would only use it on highways. For long distance drives it’s great though. Just put your destination in the GPS, start driving and once on the highway let the car take over the controls. Keep a thumb on the steering wheel and look up regularly (e.g. to see if there is construction ahead!), but you can then start doing other things as well.

I am a bit worried that we’ll see some accidents caused by Tesla drivers using autopilot software soon. Although Tesla makes clear that you are still responsible for your car, some people may not realize its current limitations and rely too much on the car not making mistakes. The autopilot will get constantly better because the cars send feedback about road conditions to Tesla, so if you’ll wait a few weeks it will likely be much safer already.

My current cars feel suddenly very old fashioned, my next car will likely be a Tesla.