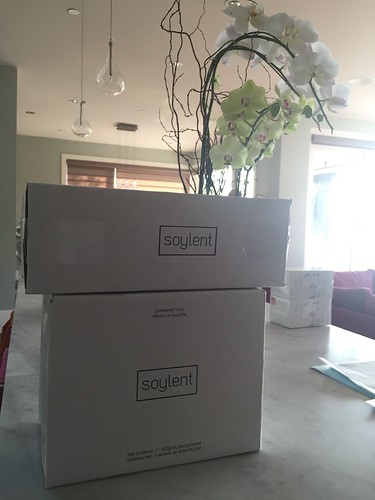 Many of my investments are in companies that make products or services that have the potential to change the world. It’s therefore a real pity that I never had the chance to invest in Soylent, a product that may redefine what food is. (Note: If shares should become available on secondary markets please let me know!)

Never heard of Soylent? It’s a powder that you mix with water to get a drink that has all the nutrition and vitamins you need to live healthy. It takes less than 5 minutes to make Soylent and it costs less than $10 per day! Soylent saves you time and money and makes it easy to get all the right nutrition elements that you need for a healthy life.

I first heard about Soylent 2 years ago and found the idea intriguing. However, you could not buy the product yet at the time (it only started shipping in the US around April 2014), so I could not try it out and therefore sort of forgot about it. Every now and then I read an article (either very postive or very negative: disruptive technologies are always quite controversial and lead to lots of online discussions. Just like Bitcoin!) and I decided to order Soylent if it would become available in Canada. And indeed, a few weeks ago I read that Soylent was now for sale in my new home country, so I ordered a batch of the product.

My first shipment of Soylent arrived earlier this week and the past 3 days I lived mainly on this product. To be honest, I was a bit skeptical when I started this food experiment, mainly because I like to eat good food and I spend quite a lot of money on it. I could not imagine that a cheap powder-based drink would change the way I would eat for more than a day. 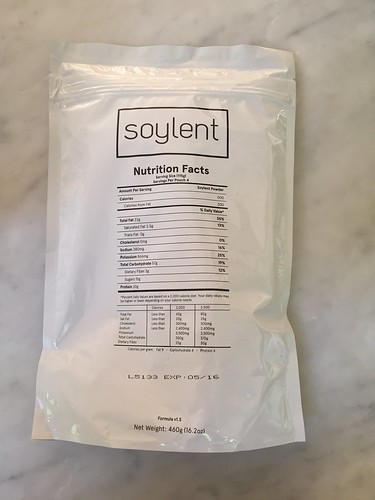 Preparing Soylent is very easy. With your first shipment comes a big jug in which you put half a bag of Soylent powder, then you fill half the jug with water and you shake the mix for 30 seconds. You then add the remaining powder, fill up the jug with water and shake again for 30 seconds. Done! It’s best to drink Soylent chilled, so I put it in the fridge and started my new ‘diet’ the next morning during breakfast. In October bottles of Soylent will go on sale as well, meaning that you don’t need to prepare it yourself anymore.

I live fairly healthy, with lots of exercise, not too much stress, and good food (plus several vitamins and mineral supplements, based on the results of my human genome sequencing). So I assumed Soylent would not make me more healthy, it would merely make eating faster and cheaper.

I got up a bit too late and had an early meeting in my office, so I did not have a lot of time for breakfast. Normally I would have a large glass of water (I start every day with a large glass of warm water), make some yoghurt with fruit and eat some bread with jam or cheese. Now I had my glass of water as usual and then I drank a smaller glass of Soylent. I finished breakfast in less than 2 minutes and jumped in my car to drive to downtown Vancouver. 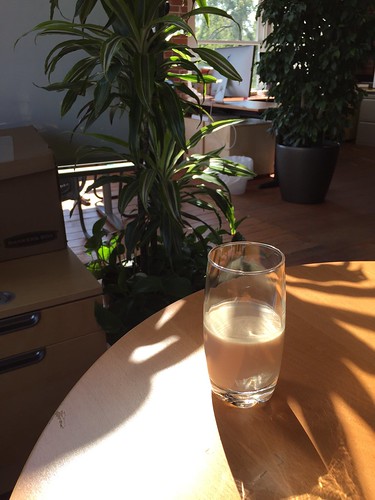 Soylent tastes a bit like pancake batter or possibly a kind of oatmeal, not a bad taste actually. It was not something I needed to get used to, and over the past days I started to like it more and more. It was very easy to drink, it reminded me of having a milk shake, partly because it has the same texture and it came straight out of the fridge so it was very cold.

When I arrive in the office normally the first thing I do is to make myself a strong coffee. But now I did not really feel like drinking coffee, which is very strange for me. I normally drink at least 2 cups of coffee in the morning and on average about 4 cups of coffee per day. A workday does not really start until I finish my first coffee. But today I was a bit thirsty and decided to have a glass of water instead.

2 hours later I made my first coffee, and that was actually the only coffee I had that day. I wasn’t sure whether not drinking coffee was related to Soylent, but after 3 days I recognize the pattern: I only drink 1-2 cups of coffee per day now instead of 3-4, and I don’t miss it at all. I actually prefer an extra sip of Soylent instead of a coffee and the main reason I drink coffee is because I am so used to making one that I don’t really think about it.

After 2 meetings, around 11 AM, I normally get hungry and start looking for a cookie or a banana. But instead I decided to have half a glass of Soylent and my craving for other food was gone right away. And I started to really like the taste of Soylent!

Lunch was simple as well. Just a big glass of Soylent followed by a glass of water. For some reason Soylent makes me more thirsty, despite the fact that a jug of Soylent contains 1.6 liters of water. I drank my lunch while doing emails, so I did not have to stop working, saving me at least 30-45 minutes (if I don’t have a biz lunch I normally I walk out to a restaurant, buy some take-away food and eat it in my office).

I had a bit more Soylent during the afternoon and had no craving for other food at all. And even better, I felt a lot more energetic. Normally I start to get a bit sleepy after lunch, but with Soylent there was no dip at all. The next day was exactly the same, so it seems Soylent is at least part of the reason for it.

When I came home I had a normal dinner. I decided not to go cold turkey and completely stop eating food, but to just replace breakfast and lunch with Soylent (except for business lunches). At home we try to have breakfast and dinner together every day, so I don’t want to change our daily schedule by suddenly just drinking Soylent. Dinner is more than just eating to me, it’s a good time to talk about the day with the family and to listen to Scott and Elaine’s stories. That ritual won’t be changed by Soylent.

I actually realized that because dinner is now the only ‘real food’ meal of the day, I tend to enjoy the food more than I would normally. It also feels like I eat more slowly. After not chewing for most of the day it feels good to eat some solid food.

I have now been drinking most of my meals for 3 days and I am very positive. There were no side effects for me because of Soylent. If you search the Internet lots of people say that their bodies and digestive systems have to get used to Soylent during the first days, but for me that was not the case. I felt at least as healthy as usual and slept very well. I suspect that not drinking as much coffee and not eating any sugary products are important reasons for this.

As a bonus I seem to be losing weight as well. Likely because I eat less calories, especially during lunch. Also there are no snacks in between, I totally lost my cravings for something sweet or some carbs in the late morning or mid-afternoon. When I want to eat something I just take a sip of soylent.

Based on my very limited observations and based on my personal taste, I do believe there could be a huge market for Soylent. The food seems to be healthy, at least more healthy than the food that most people in the (Western) world eat. It is also relatively cheap compared to buying fresh foods: for about $10 per day you can have the equivalent of 3 meals and some snacks per day, and this price may come down further if the soylent production scales up.

And not only that, the food can also save you at least 2 hours per day, assuming you only eat Soylent. No more grocery shopping for fresh food, no more cooking dinner (and cleaning up afterward) and not spending more than a few minutes on eating the food.

I have only tried Soylent for 3 days now, but I am convinced that I will keep eating it on a semi-regular basis. Not for all my meals, but possibly a few days per week for breakfast and/or lunch. Although many hardcore Soylent users have been eating just Soylent for weeks or even months, I won’t give up good ‘real’ food for Soylent. But I could imagine that when I should be alone at home for a few days that I would eat just Soylent to save time.

Soylent is certainly not for everyone, and most people will be very skeptical at first. But over time I think more people will try it out and will realize that it can be a good partial alternative for their normal diets. It saves time, is healthy and cheap. It may even help to solve the problem of hunger in the world. Soylent is disrupting the food industry, it could very well be the future of food!