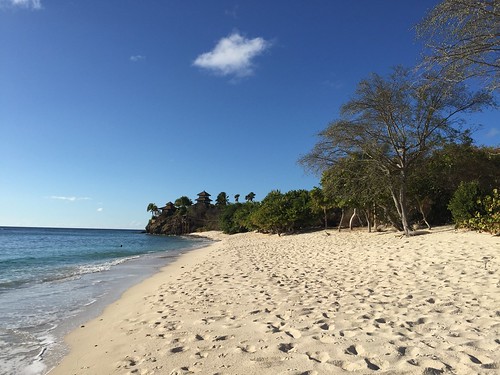 The past 3 days I spent on Necker Island, Richard Branson’s private island in the British Virgin Island, with about 30 other people who are active in the bitcoin and blockchain world. It was an amazing experience, not only because the island comes very close to what I think paradise would look like, but also because the summit was very productive and gave me lots of things to think about. If I would not be a venture capitalist and if I would not be involved in Uvamo I might consider to work on blockchain themes full-time. It is clear to me now that the blockchain is the future and is already starting to change the world.

This blog post consists of 2 parts, this is part 1 in which I will talk about how I experienced spending time at Necker Island. Tomorrow I will post the second part, which is about the blockchain summit itself.

Despite the fact that most of the companies that I was involved in in China were incorporated in the British Virgin Islands I had actually never been there. The group of islands, located about 150 km west of Puerto Rico, is more unspoiled than I had imagined. Road Town on Tortola (the place where most BVI companies seem to have their P.O. Boxes) is a small town, likely with a ratio of at least 10,000 companies per inhabitant. It’s a great tourist destination, although a bit off the beaten path (something I like). 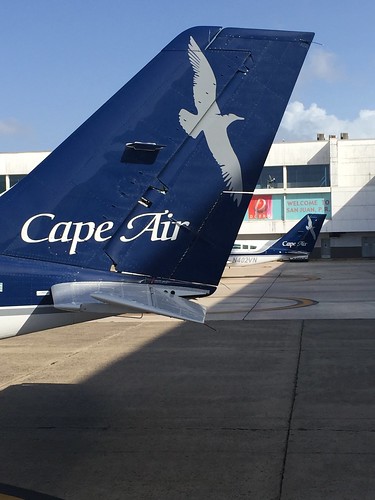 Getting there is not easy. From Vancouver I took the redeye to New York, then I flew to San Juan in Puerto Rico and from there I took a very small plane to Beef Island (which is connected by bridge to Tortola). At San Juan airport I already met several of the participants in the lounge and later a few others at the gate. Not all of us took the same plane, because each plane only fits about 8 people, but there are air services at least once an hour. On my plane there were 2 other participants, Mike, a bitcoin trader from Chicago and Danny who runs a fund that invests the money of the founders of Alibaba. 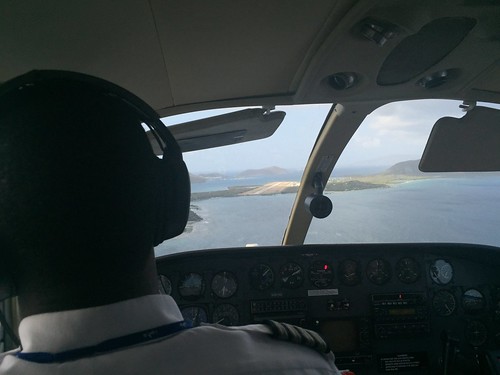 After arrival at the BVI airport one of Necker’s staff picked us up and we took a minivan taxi to the marina (next to the airport terminal, we could probably have walked it in 5 minutes). I quickly understood that on Necker you don’t have to do anything, so even for a short walk transportation is always arranged. We arrived at the jetty where one of Richard’s 600 horsepower speed boat was waiting for us. We stepped on board and were immediately offered a drink. The bottle of champagne looked inviting, but because it was hot and we were thirsty from the long trip we opted to start with a cold local beer. 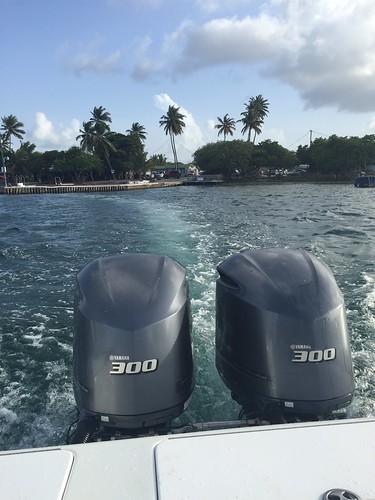 Then we took off. First slowly because of all the anchored sailboats in the bay (which immediately inspired me to go sailing here one day), and then full power onto the sea. The guy who drove our boat told us that the boats go up to 90 km/h. Not sure how fast we went, but it was faster than I had ever gone on a boat. We jumped over the waves and it was actually hard to drink the beer from the bottle! I took a few pictures but had to watch out not to lose my camera because of the wind. 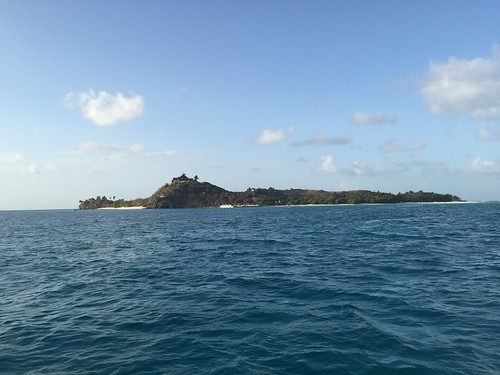 About 20 minutes later Necker appeared on the horizon. When we got closer to the island a drone circled above the boat so the participants on shore could see who was arriving. 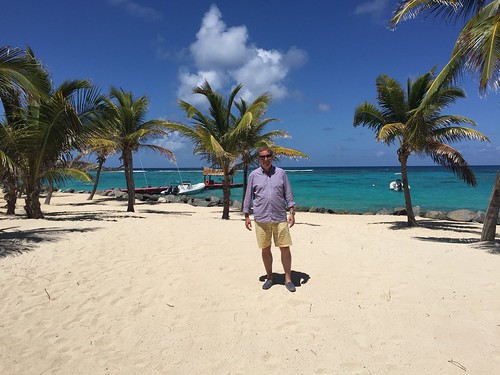 Necker is a beautiful island, with white beaches, tropical vegetation, tons of wild life (including 7-8 feet long iguanas and a large flamingo colony) and of course 5-star accommodations. 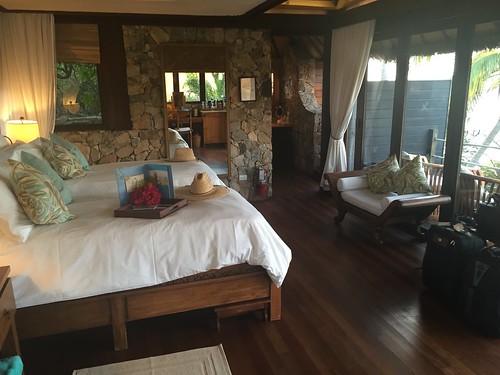 Danny and I shared a Balinese villa and after a short stop at the Great House (the main house on the island with a large lounge and great views), we got a electric golf cart to drive to our villa. Our place overlooked one of the beaches and a lake full of flamingos (they can be quite loud in the morning!). We quickly freshened up (our luggage was already in the room) and then went back to the Great House for cocktails with the rest of the group and for the official opening of the blockchain summit. 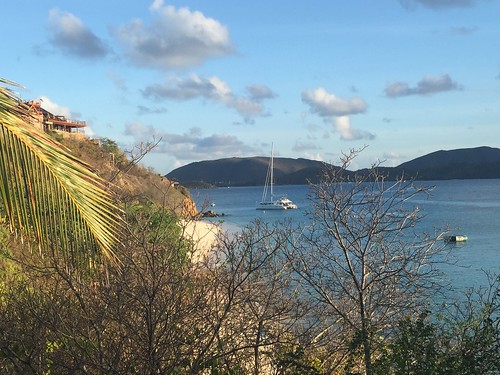 Necker Island is about 300,000 m2, so it’s not a very large island (I sailed around it on a Hobie Cat in less than 30 minutes). Only about half of the island is cultivated, the other half still looks like most of the other islands (quite dry with not a lot of vegetation). The part where the 6 villas and the Great House (with 8 additional bedrooms) are located has undergone a complete metamorphosis, the vegatation is lush and Richard built decent roads. The beaches on this side are beautiful and there are several swimming pools and hot tubs. The best hot tub is on top of the Great House, the highest point on the island. There you feel literally on top of the world! 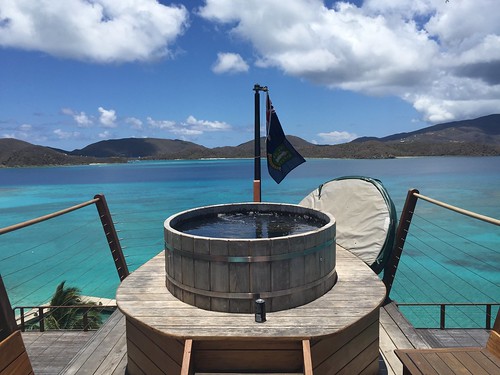 You can actually rent the island, with prices started at $65,000 per day. That may seem expensive, but the island can house up to 30 people, so it’s actually quite reasonable for such a place. Of course you can’t just rent it for one night (the minimum seems to be 5 nights), so you’ll always be looking at at least a few hundred thousand dollars, similar to what you would pay for a super yacht. 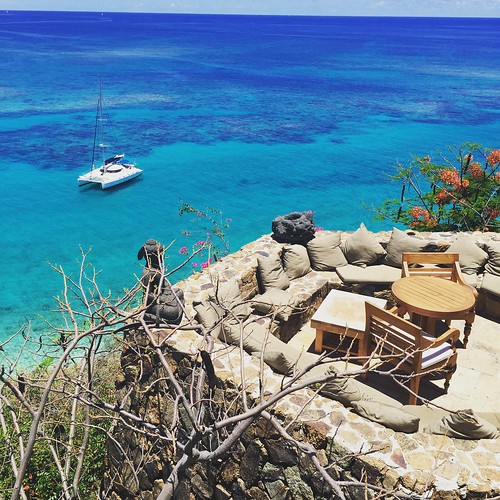 Many of the world’s celebrities have stayed at Necker over the years, although the staff don’t talk too much about who they have met. I understood that Google co-founder Larry Page got married on the island. He liked it so much that he bought the island opposite Richard’s. I sailed there to take a look, it seemed like a nice place to live as well. 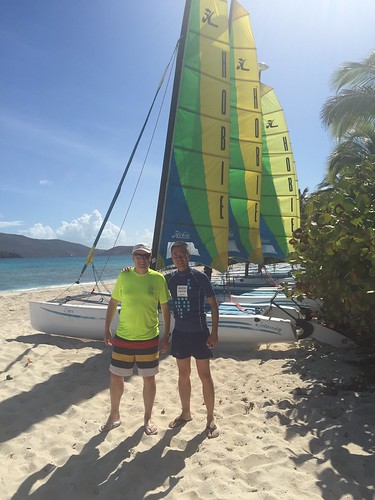 For $65,000 per day you get everything you can imagine. All food and drinks are included and the island has a total of 120 staff, so you don’t have to do anything yourself. The service is extremely good. Not only do you immediately get everything you want, but the staff also anticipated your needs. 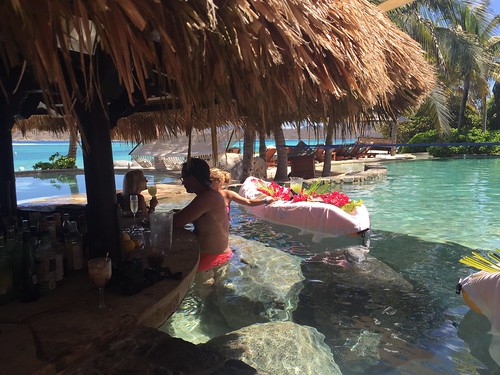 Most of the staff are in their 20s and clearly chosen because they love to party and because of their looks (especially many of the girls were stunning). Richard likes blond girls, that was clear! But they also work hard and seem to be very happy to work in one of the nicest places in the world. The manager of the island is a cool guy as well, my impression was that he runs the island very well. 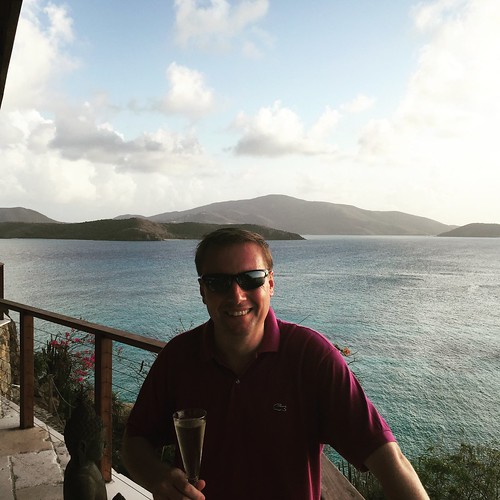 Virtually everything is possible on Necker and some parties go on through the night. When I left this morning at 6 AM the last people had just left the beach party (I wisely left the beach before midnight, I can guarantee you that spending almost a full day on planes with a hangover is an experience you do not want to have more than once in your life). 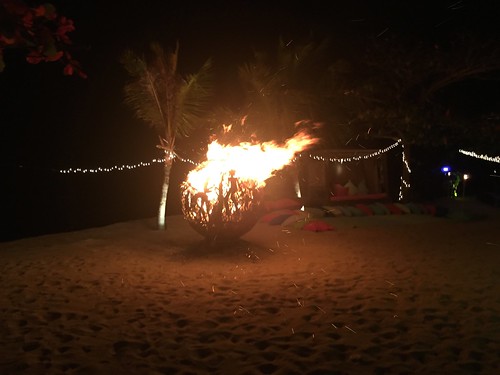 At 6 AM we saw a staff member walking along the road with a big wound on his forehead. When we asked him what happened he said that while dancing a tree suddenly popped up in front of him! It’s all part of life on Necker. The previous manager on Necker did not allow the staff to drink or to (fill in the blanks yourself) with the guests, but that did not fit well with Necker’s culture so he only lasted for about a week! Anyway, what happens on Necker stays on Necker, but you probably catch my drift. 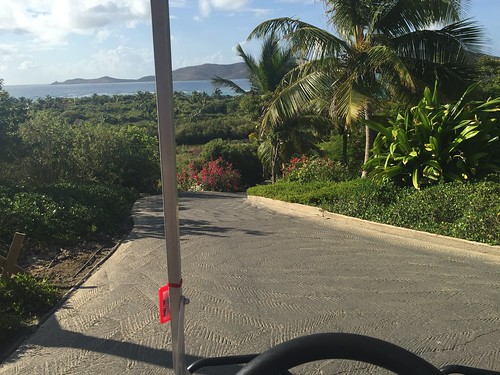 The villas are very nice as well, on par with the best accommodations in other parts of the world. You have total privacy in the villa even when the island is ‘crowded’. The bathrooms are partially outside but they are built in such a way that you can see the island but nobody can see you. Of course that may change now that drones are on the island! 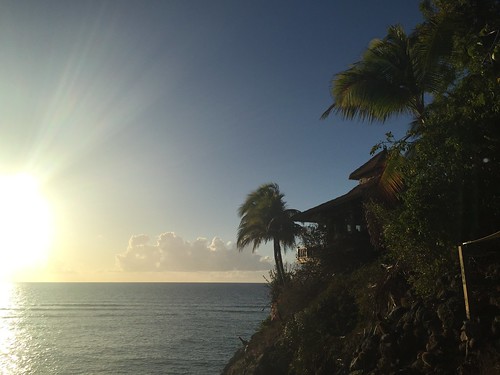 The mini bar was well stocked with nice bottles of wine and champagne (all included in the price of course), but there was no opportunity to drink any of it. The only thing I drank in the room was espresso, all rooms have a very good espresso machines. 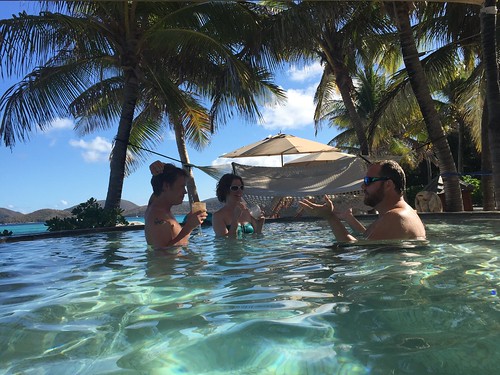 Having your own private island seems like a nice thing, but after staying on Necker for 3 days I am not so sure if it’s really something I would like to have (assuming I could even afford it). I actually subscribe to a private island newsletter so I paid a lot of attention to the details of what it takes to live here. I think Richard made a smart choice to build small luxurious villas on the island and rent these out. Not only does it make living a lot more affordable (I am sure he makes decent money with the prices he charges, even with 120 staff on the payroll), but it’s also nice to meet interesting people all the time (most visitors seem to be celebrities or business people). Living on an island on your own will likely be quite boring after a few days already. Good to know that I can take one that off my bucket list. 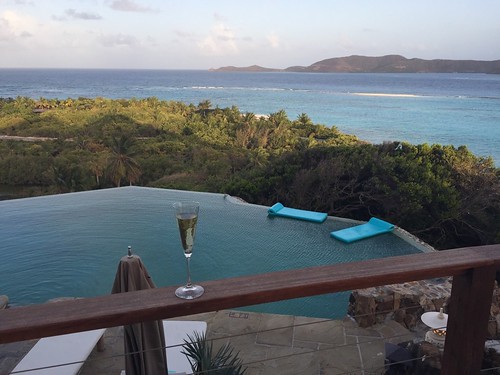 Richard Branson was the host, but he was not very much involved in the event. He showed up at some sessions and at some of the meals, but most of the time he was doing other things. Part of the reason was that he has recently become a grandfather for the first time (actually 3 times in the past 6 months, one of his kids had twins, and another had a daughter), and the grandkids were on the island as well during the event. Richard even took his 3-month old granddaughter to breakfast one day.

Richard is very charismatic and I think that’s one of the reasons of his success. He is always laughing and interested to talk to everyone. Interestingly he also seems very knowledgeable about the companies that he runs: during one breakfast I happened to sit next to him and he was talking to the lady opposite me. She is a bitcoin miner in her free time, but her day job is at Virgin Galactic designing the pressured spacecraft cabin and training astronauts (so she actually works for Richard). He seemed to know a lot about the details of the spacecraft when others asked questions about it and he wanted to see the latest pictures. 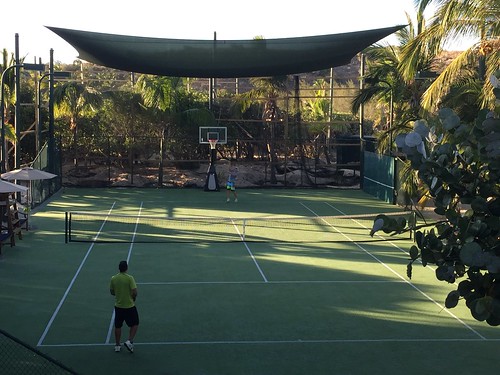 Richard seems like a great guy to work for. He is also very sportive, I was told he runs and kitesurfs in the morning and in the afternoon I saw him playing tennis with his personal trainer. 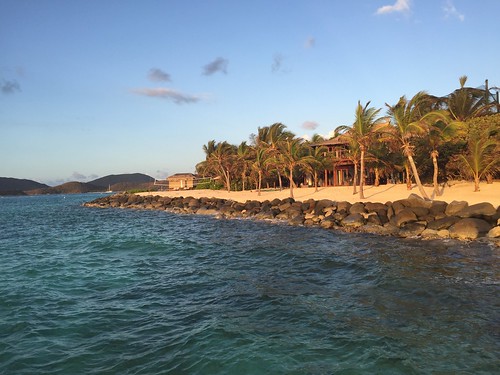 Anyway, back to the reason why we were at Necker. Although it may seem we only drank and partied that was certainly not the case, the main focus during the 3 days was on bitcoin and its underlying ledger, the blockchain. Tomorrow I will talk about the main themes we discussed, our findings and our plans for the future.

A set of all pictures that I took during the Blockchain Summit is here.