Yesterday I was excited to see that Goldman Sachs and IDG (Tudou’s first investor) invested in Circle.com’s $50 million round. Having Goldman on board is a major milestone, they are the smartest kids on the block and when they invest in Circle it means they start to believe in Bitcoin and the blockchain. IDG is also an important company to have as an investor, because with their Chinese connections they should be able to open a lot of doors in China for Circle.

Circle wrote a blog post about the investment and from that article it becomes clear what they are planning to do. They are not just a bitcoin exchange and wallet anymore, but they are slowly becoming a bank. So far you could only hold Bitcoin on their platform, but now you can also hold your money in USD, just like on a normal bank account. And you can transfer this money to other Circle accounts (in USD or in BTC) much faster and cheaper than you could do it through a normal bank.

And because Circle plans to enter China, it means that you will eventually be able to put Chinese RMB on your Circle account and transfer that in seconds to a USD account in the US (or any other country where Circle will be active). This is a major step in the disruption of the remittance industry. I am surprised that the Western Union stock only went down 0.5%, after this announcement, I would be very worried as a WU stockholder.

But also banks should watch out because an important part of their business can be gone in a matter of 2-3 years. And it won’t be just the remittances: if people transfer money they normally leave part of it on their accounts, which is then used to lend out to other bank customers and to create new money by fractional reserve banking. 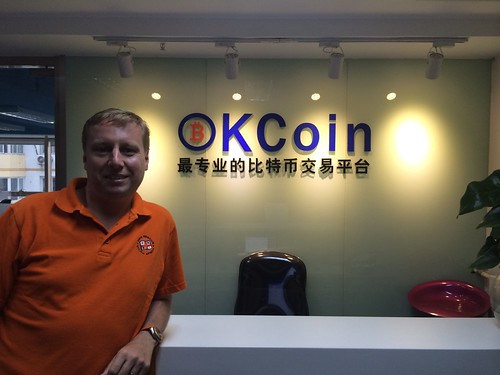 Visiting the OKCoin office in June 2014

The superwallet that Circle created is actually not the first in the world. China’s leading exchange OKCoin launched a similar product a couple of days ago, but it did not get as much press as the Circle announcement (full disclosure: my wife is an advisor to OKCoin). OKcoin also lets you do cheap and fast international transfers and allows you to hold USD, RMB or BTC in your wallet. So in the Chinese market they are far ahead of Circle, because Circle can’t offer RMB yet.

The blockchain is an excellent mechanism to replace the old way of transferring money, and soon there will be a lot of other companies doing international remittances using Bitcoin technology (e.g. Melotic is already doing this, and Abra and ZipZap will launch in the near future). How many of these companies will also allow you to hold multi-currencies in wallets remains to be seen, but it’s clear that Circle and OKcoin are the first Bitcoin companies that are evolving into bank-like institutions with bank accounts and remittances.

OKCoin is actually a lot closer to a traditional bank already, in the sense that you can do more than just hold and send money. OKCoin now already offers futures, margin trading and even P2P lending. They still operate a bit under the radar for most people outside China, but I think they are quietly growing into a financial giant. The Bitcoin banks are coming!