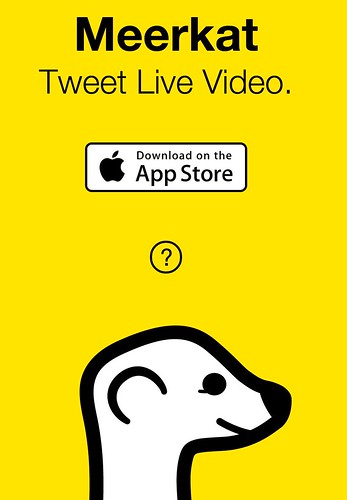 Two weeks ago nobody had heard of Meerkat and now suddenly everyone is talking about it (well, at least all the super-early adopters that I surround myself with). It’s quite amazing how quickly this video streaming app has gained traction, despite the fact that it’s actually nothing new. It reminds me of how Twitter’s exponential growth started at SXSW in 2007, and Foursquare at the same show in 2009 (coincidentally this week SXSW takes place again!). Why is Meerkat growing so fast?

For those of you who have not used Meerkat yet, it’s basicaly just a live video streaming app. There are many of these apps but none have really taken off like Meerkat has. Already back in 2008 I was using live streaming app Qik at the Opening Ceremony of the Beijing Olympics. I still remember that because it only worked on Nokia phones and I just had my first iPhone, so the team came to my hotel a few hours before the Olympics started to give me a Nokia phone! Qik was too early, the mobile Internet speeds were too slow and the data still too expensive (or you could not connect to the Internet at all, like happened to me at the Olympics), so they did not take off. Eventually Skype bought them and that’s the last I heard of them.

There were many other live streaming apps, but I didn’t really use any of them until I found Meerkat a few days ago. Suddenly I saw the light, Meerkat did 3 things better than other players. The most important one is that it was built on top of Twitter. When you go to Meerkat and you start streaming, automatically all your Twitter followers will get a message that they can click on to immediately see what you are viewing. This leads to a viral effect, because people retweet the tweet.

The second is the user interface, it is so simple to use it. You can give your stream a title or you just click start, that’s all you need to do. Nothing to set up, nothing to link, it just works. And you can see who is watching your stream and these people can interact with you. Excellent!

The third one is the fact that the stream can only be viewed live, it is not recorded so you can’t watch it again. You can record your own streams and publish them if you want, but that’s not the aim of the app. This may actually lead to a lot more video being streamed, because if something awkward happens only the people who watch it live have seen it. Theoretically they could record their screens, but that’s unlikely, and Meerkat obviously does not allow them to record the stream. This is one reason why Snapchat took off, people seem to want this. 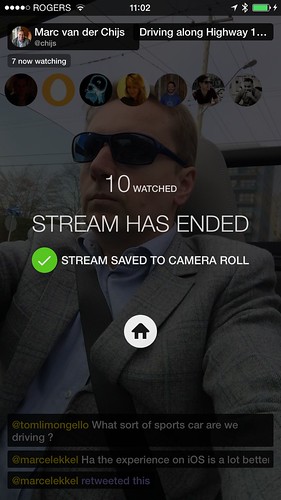 This morning I decided to try out Meerkat while driving from a meeting to the office. It was a super boring stream, just showing me driving while listening to some Latin music on Sirius XM. I did not say anything and I did not show much of the surroundings. The stream was only about 10 minutes, but during those 10 minutes I had 10 people live watching me drive! If I can generate 10 viewers during such a short time for such a boring video, while most people did not even hear of Meerkat yet, it means this thing has legs.

Suddenly I realized that this could be huge. At any time I can now stream live what I do and the whole world could theoretically watch me. And I have control of the stream, nobody else can post it somewhere for others to watch. I never thought that was important, but I probably would not have recorded myself driving if I knew the stream could easily end up on YouTube.

Is this sustainable? Nobody knows, sometimes apps have huge growth and then they suddenly fade away, see for example Chatroulette in early 2010. But to me Meerkat is more than just a fun app like Chatroulette. It may have found a video solution for the basic Internet need of sharing and showing off. It’s easy to copy and because it’s built on top of another service they depend on them, but if they manage to keep the current traction they have a good chance to become huge. Because of Twitter the service can grow virally, which is a very smart. For sure the timing seems right, mobile Internet is much faster and cheaper than a few years ago and Twitter has almost 300 million active users that can view and share Meerkat’s streams. In my opinion Meerkat may have nailed it.

Twitter just bought Periscope that seems to do something very similar to Meerkat, but if I were Twitter I would offer Meerkat $100-150 million and integrate it into Twitter. Meerkat needs Twitter to grow, so I think they might take the offer. Or they may want a multiple of that, live video is at a tipping point and there are clear business models for this, meaning that this could be worth a lot more than “just” $150 million. An acquisition might lead to huge new growth for Twitter itself, because so far you can only use Meerkat with Twitter. Interesting times ahead, looking forward to following (and using) this app!