Yesterday I wanted to do run in the evening, but because I had a board call with China at 6:30 PM I decided to do a 12 km run to and around Stanley Park during lunch.

While running on the path around Lost Lagoon I saw a greyish unleashed dog in the distance. I did not see the owner, which was a bit strange. I slowed down a bit and when I got closer I noticed that the dog didn’t wear a collar and looked scruffy. The closer I got the more I realized it actually didn’t look like a real dog and that it might be a coyote…

It seemed to look at me for a short time but then just ignored me. I walked as close to the lagoon as possible, trying not to startle or provoke the animal, and was happy when I passed it (the coyote was probably just 10 meters away from me at one point).

Unfortunately I did not bring my iPhone while running, so I could not take a picture – I probably would not have dared to take a photo anyway. But a quick search online turned up several other sightings of coyotes in Stanley Park over the past weeks, so I am now pretty sure it really was a coyote. 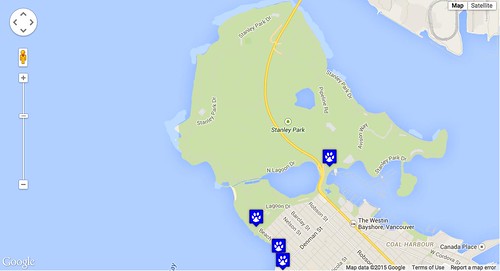 When I got back to the office after my 55 minute run – normally I run the 12 km a few minutes slower, I guess the adrenaline rush because of the coyote helped – I went to Google and found out I made some serious mistakes.

First of all you should never approach a coyote if you see one, but slowly back off. In my own defense, I didn’t realize it was a coyote until I was quite close already.

But worse, I then passed the coyote walking as close to the water as possible. My thinking was that in case it would attack I would just jump in the cold water. Well, online I found that coyotes are excellent swimmers and actually follow their prey into the water!

Of course nothing happened because coyotes don’t generally attack humans, especially not when they are on their own (if you see a pack of coyotes it may be more dangerous). It was an interesting experience though and a reminder of how close we are to real nature in downtown Vancouver.

Update (March 19, 2015): I just received an email from the Stanley Park Ecology Society with some interesting information that I partially copy/paste her.

We’ve been keeping a close eye on two coyotes in the West End area as we know that for a time last summer a nearby resident was leaving food out for it at the foot of Nelson Street where it enters Stanley Park. It’s habituated behaviour subsided after the feeding situation was resolved, but the past couple of months the behaviour has been returning likely due to food scarcity and some success in getting food from people. This is most often the explanation for a change in behaviour like this.

The mangy coyote had been traveling to meet a mate in Olympic village but they appear to have returned together to den down near Burnaby and Bute Street. Based on reports I have received, they have yet to show any aggression towards people or pets, but they are also very comfortable so we do not want their behavior escalating to the point where it approaches people. We are encouraging people to scare the coyotes if they linger in public spaces (mainly for the coyote’s safety) – we are also asking residents to keep an eye out and report any instances of people feeding it or if it shows any aggression. Feeding coyotes is illegal under the provincial wildlife act, and is a ticketable offense, so if we are able to gather enough details on anyone feeding we may be able to act on it.