Do you like to read detective books or watch detective movies? Do you enjoy a reality show? Then how about a combination of the 2 in the form of an audio podcast?

About 2 weeks ago I wrote a post about the Startup podcast that I liked a lot, and after that I decided to give the Serial podcast a try. I had heard about it a few weeks before already but did not think it would be interesting to listen to. Well, I was completely wrong. When more and more friends wrote about it on Facebook and Twitter, when even the mainstream press started to write about the podcast, and especially when the podcast hit #1 in iTunes I knew I was missing out on something.

It took me less than one episode of this weekly program to become addicted to the podcast. I ‘binge listened’ the first 7 shows in just 2 days (episodes are 30-50 min each). I lost sleep over it, listening to “just one more” episode at 2 AM and I drove home slowly from work so I could listen to a few minutes extra of the podcast. The experience reminded me of some of the top TV series that I binge watched, such as the early seasons of Lost and more recently Downton Abbey, where I could not wait to finish my work late at night so I could watch an episode. 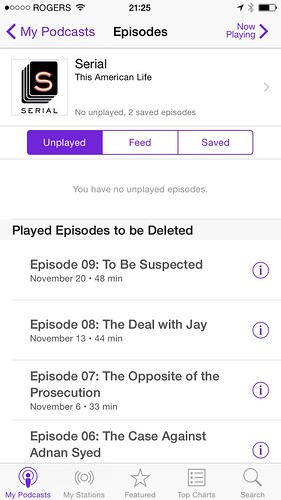 Serial is the story about the 1999 murder of Hae Min Lee, a Baltimore high school senior. Her ex-boyfriend Adnan Syed was arrested a few weeks after the murder and was later convicted. He is still in prison. The thing is, he says he is innocent. Of course many criminals say they are innocent, but the longer you listen to Serial the more you realize that some strange things have happened in the investigation.

Did Adnan do it? I don’t know yet. One moment I am totally convinced that he is not innocent, but 10 minutes later I feel certain that he was framed and someone else was the murderer. I change my mind continously while listening to the podcast and when thinking about the facts afterward.

One reason why the show is so successful is because it slowly releases new evidence. The storytelling is amazing, with an important role for Adnan who is interviewed by phone in almost every episode. You hear him speak to you about the crime and what happened on the day of the murder (was she really murdered that day?) on your headphones or over he speakers of your car. That is so powerful, especially because his story is mixed with insightful comments by host Sarah Koenig.

Interestingly, nobody knows how the podcast will end. There will likely be another 3 episodes, but even Sarah says she does not know what her final verdict will be. The Internet is full of theories about Adnan and what might have happened on January 13, 1999. There are tens of thousands of comments on Reddit, people write blogs about it and there are even podcasts about this podcast. Many (or likely most) of the major newspapers have written about Serial and keep writing about it. I have never seen this before for a podcast. Serial is taking the medium to a completely different level.

One takeaway from Serial is how sloppy murder cases are investigated in the US. The police wants to find and convict someone and seems to just put aside evidence in favor of the accused. Adnan’s lawyer may not have had the best for her client in mind (unfortunately she died a few years ago, so she could not be interviewed) and it’s clear she made some major mistakes during the trial. Racial profiling is a big issue, my impression is that had Adnan been a white guy he may not have been convicted. And the scariest thing is that a former police detective who was paid by the program to look at the evidence, said that this case was actually investigated better than average…

If you want to give Serial a try you can listen here to the podcast on iTunes and here on Soundcloud (embedded below). Or just go the website of the Serial podcast where you can read about and stream all episodes. And if you like it as much as I do, make sure to send a donation to the production team so they can keep on doing the world’s best storytelling. I can’t wait until Thursday when the next episode comes out at 6 AM EST!