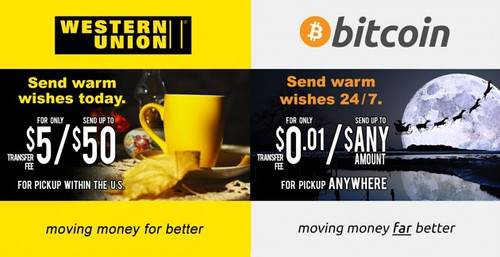 One of the companies that will be threatened most if Bitcoin becomes a success is Western Union. So when a parody on one of their ads appeared on Reddit and Facebook, they were not amused. The company sent a DMCA notice to Facebook forcing them to take the picture down.

Not a smart move for anybody who understands social media. Not only is a parody generally considered fair use of an image, so there is no legal basis for the notice, but normaly a take down notice leads to a lot of additional reporting, so many people who would not have seen the ad now see it.

The original ad makes me feel sad for people that don’t have normal bank accounts and need to use Western Union to transfer money. Sending up to $50 for ‘only’ $5 is crazy expensive, this is a fee of 10%. And this is only within the US, not even to overseas locations.

I wonder if there are other hidden fees, because in the add it only states ‘transfer fee’. I tried to figure this out on their website, where I noticed the small print messages “Card issuer cash advance fee and associated interest charges may apply” and “Western Union also makes money from currency exchange”.  Of course there will be no currency exchange when sending dollars inside the US, but that could add up for international transfers. Also “fees for agent locations may differ from online fees”… Plus there is a maximum amount of $999 that you can send per 30 days.

Generally I don’t think the US will be an easy market for Bitcoin to take off, because it’s too well developed to solve a real need. But this kind of transfer fees remind me that even in North America there are some serious business opportunities. I hope the ad will lead a lot more people to consider using Bitcoin. The technology is still too difficult to understand for most people (especially that part of the population that uses Western Union in the first place), but easy-to-use services such as Circle.com are now available to anyone and could save people a lot of money.