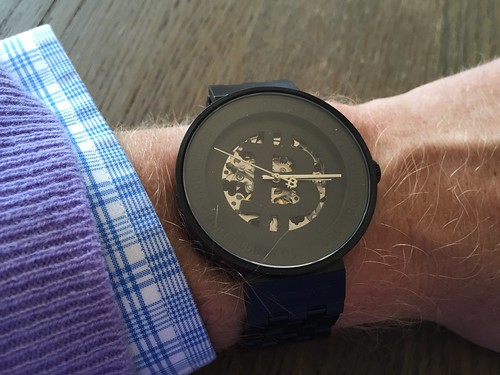 I like nice watches and I am a big fan of Bitcoin, so when I read in a Chinese WeChat group about the first watch for the Bitcoin aficionado I immediately decided to check it out. Normally I don’t buy watches off the Internet (I want to see and feel them first, especially more expensive ones), but this one is so special that I ordered it right away after seeing it online.

The watch, called the Cryptomatic, is available in 4 different colors (red gold, silver/red gold, silver, and black) and I immediately liked the black one. The timepiece ships from Hong Kong and took about 3 days to arrive in Canada.

What’s I like about the watch is not only the fact that it prominently shows the Bitcoin logo and has the 1-12 numbers in binary format, but also that you can only buy it with Bitcoin. Luis Rosende, the designer and watchmaker, is also a big Bitcoin believer and said in the group chat that he refused several orders because people wanted to pay in fiat currency. If you want a watch like this and you can’t to pay in Bitcoin you don’t ‘deserve’ to own one yet. Hint: If you don’t have bitcoin yet and want this watch, go to Circle.com and set up an account. It’s very easy and takes less than 5 minutes to set up and fund a bitcoin account. 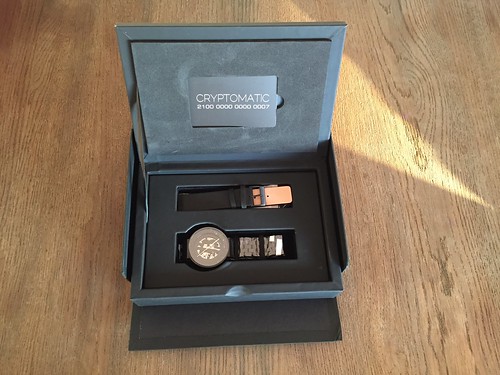 The packaging of the watch looks great and opening the box for the first time was part of the experience for me, it reminds me a bit of how Apple packages its products. The watch itself is as beautiful as the pictures on the website. It’s quite thick but not too heavy, and it comes standard with a black metal chain and an additional black leather strap. The chain can easily be shortened with the tools that come with the watch.

The Cryptomatic itself is self-winding, just like most other high(er)-end watches, so you’ll need an automatic watch winder in case you don’t wear it everyday. If you don’t have one you can buy one here with Bitcoin. The watch is a limited edition watch, each of the 4 colors is only produced 200 times. Your watch will be numbered, mine was 003 out of 200 (it’s engraved on the side of the watch).

The Cryptomatic watch costs CHF 888 (about 2.5 bitcoin on the day that I ordered it), so it’s not super expensive but it’s certainly not a low end watch either. If you believe in Bitcoin and want to spread the Bitcoin gospel, this is a great product to own. I am sure it will be a conversation starter at many dinners, meetings or parties!