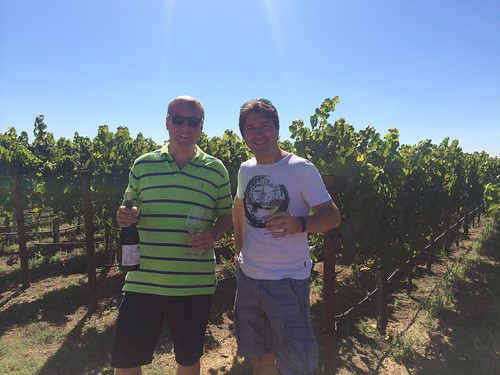 Last week my friend Danny Wilms Floet came to visit me in Vancouver to do a road trip from here to California. I have known Danny for 35 years, we were schoolmates in primary school and he is currently living in Shanghai – coincidentally in the same street as where I used to live until March 2013.

We left on Sunday morning without any real preparations. The idea was to first drive through Washington state to Portland, Oregon, and spend the first night there before driving down the Oregon coast. But while driving out of my driveway I met my neighbour who told us that if we wanted to follow the coast we should not go down as far as Portland and try to spend the first night in Cannon Beach. We looked it up on my car’s GPS and that seemed indeed a better destination for the first day.

The weather was nice so we drove top down for most of the way, even on the interstate. Danny knows a lot more about contemporary music than I do, so he created some playlists in Spotify to play during the ride, which was really cool. We mixed that with some Sirius XM satellite radio stations (classical, jazz, 70s, 80s, and current hits) and even some occasional Dutch pop songs from the 80s that we both had not heard for years. 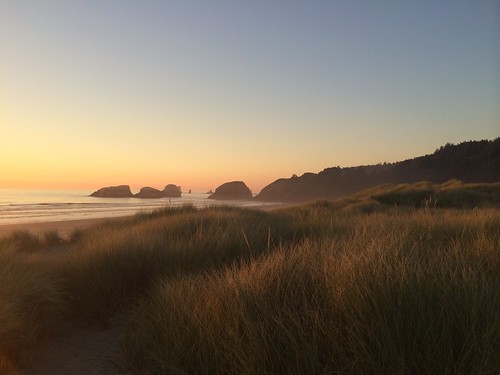 We arrived at Cannon Beach exactly during sunset, and we had a great view of the sun going down in the Pacific. I then checked the Hotel Tonight app for hotel rooms, but it turned out that Cannon Beach was fully booked. But the app showed us some other hotels with availability in Seaside, which was just a 10 minute drive away. We checked the best price online and then went to the hotel and asked for their best price. That was lower than the online price so we booked 2 rooms, put our luggage in the rooms and went out for a seafood dinner and drinks. We ended up in the only bar in Seaside that was open after 11 pm and had a memorable first evening. Not too many details here, but it involved almost getting into a fight with a completely drunk and very aggressive lady and a slight hangover because someone gave us whiskey shots while we were drinking IPAs after lots of local wine. 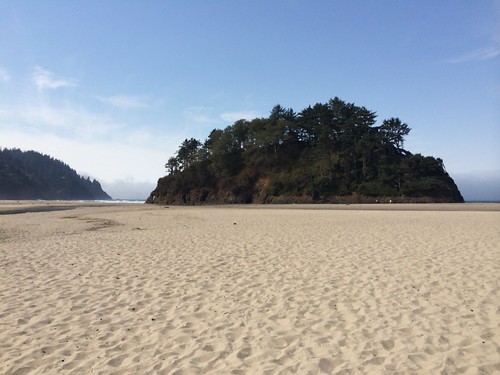 The next morning I needed some coffee and a walk on the beach to wake up, and we did not hit the road before 10:30 AM. That didn’t matter because we had no fixed plan. Or actually, we had no plan at all. My idea had been to drive along the Oregon and California coast to Napa Valley or so, but when my GPS showed us that that was something like 1100 km we changed our mind (I first double checked with Google Maps, in my mind it could not be more than 600 km or so – I was wrong!).

So we decided to take it easy and drive until sunset and then find a place to stay. The drive along the Oregon coast was amazing, much better than I could have imagined. The weather started off quite good, but halfway the coast it became more cloudy. That actually added to the experience, but it also got much cooler so we closed the roof of the car. Around 7 pm we were close to the Oregon and California border and we decided to take a hotel room in a little town called Brookings. Every single bar and restaurant in that place seemed to close down by 9 pm, so we had an early night (or better, I worked on emails and RSS feeds until midnight in my room). 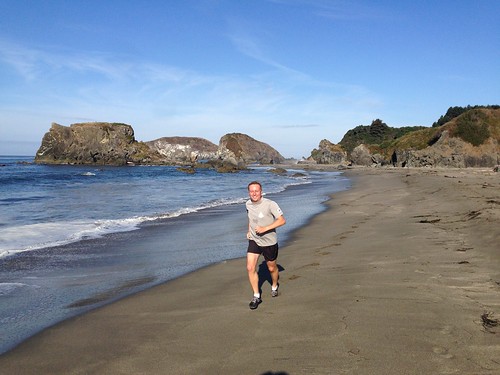 The next morning we started with a run along the coast. Just north of Brookings we found a fantastic wild beach that was perfect for a run. After the run we showered, got some coffee and topped up our energy levels with a donut before we took off for the next leg of our trip through Northern Calfornia. The first part was still along the coast and we visited some nice little towns (my favorite was Trinidad, CA, where I would have stayed for a night if we would have had more time). The second part was through the redwood forests, which was quite spectacular as well. 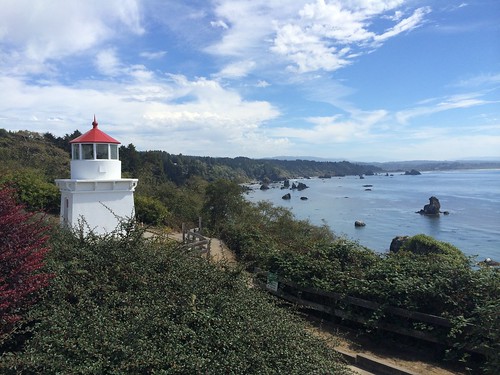 We ended up in the town of Healdsburg in Sonoma, where we found a hotel and then went for dinner at a nice French restaurant. We had some good wines and great food and then started looking for a nice bar. Healdsburg is a very nice town and great for boutique shopping, but it’s not the best place to party. 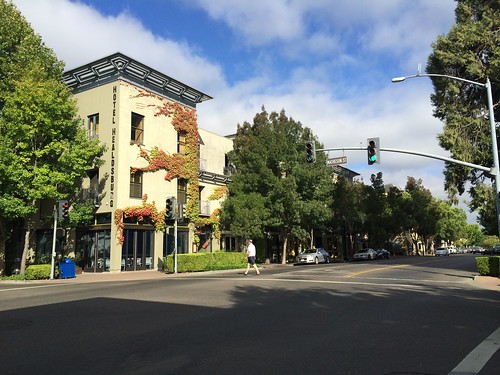 The first wine bar that we found only had French wines, so we did not even go inside (if you’re in the middle of one of the best wine areas in the US I find it a bit arrogant to not have any good local wines on the menu). The next one seemed to be much better and we shared a great bottle. Unfortunately after about 30 minutes we were the only guests that were left and the staff started cleaning the bar… So by 11 pm we were back in the hotel again. 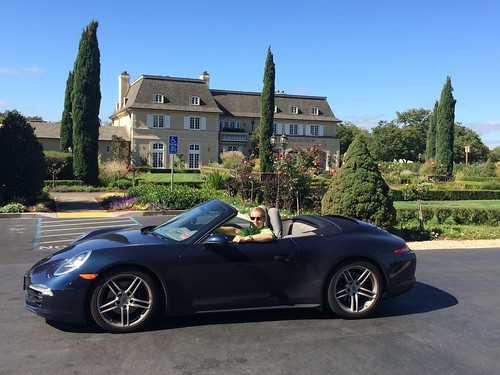 Wednesday morning we had a quick breakfast in the hotel (bagels & coffee) and then drove to the Kendall-Jackson winery. Kendall-Jackson is one of my favorite Californian wine brands, and it’s the brand I drink most when I open a bottle during the week or at dinner (mainly Chardonnay and Cabernet Sauvignon). We arrived around 11 AM and started with their Garden Tour, a wine tasting in their gardens and vineyard. We among others tasted some of the Chardonnay grapes that would be harvested that night (!) and of course drank their Chardonnay with that. 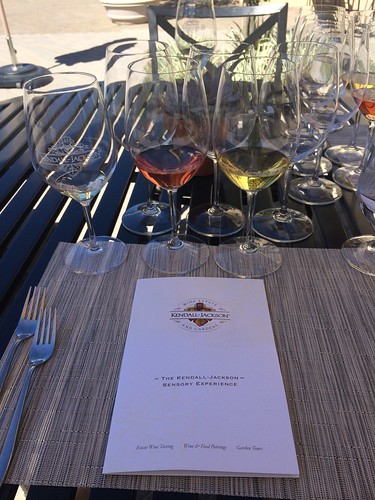 After tasting several different wines in the gardens we ended with a dessert wine on the terrace. Because it was lunchtime we decided to have lunch there as well and ended up with a wine pairing lunch. The food was quite amazing, this was very high end cooking, something I had not expected at a winery. The combination with the wines was perfect and we had a great meal at Kendall-Jackson. 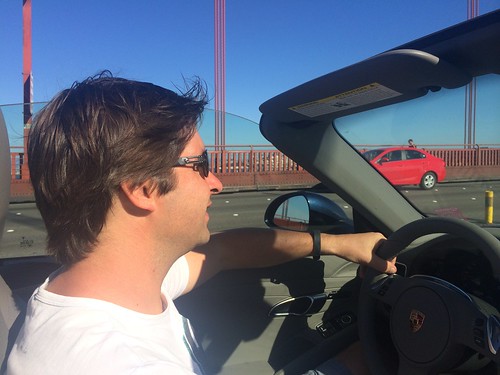 After tasting so many wines it’s not advisable to start driving right away, so we made a walk through the vineyards, had a coffee and bought some souvenirs before hitting the road again. We first drove to Tiburon with its nice views over the bay to San Francisco and then drove over the Golden Gate Bridge along Highway 1 to Half Moon Bay. I guess we could have stayed in the Ritz-Carlton there (one of my favorite hotels in the world because of its location and great atmosphere), but we had made a reservation in Mountain View already so we continued on for another hour. At night we had a great sushi and sake dinner followed by a bottle of Napa valley wine in a local bar, where we arrived just in time for the last order at 10 pm… We finished the night with a pale ale in the hotel room. 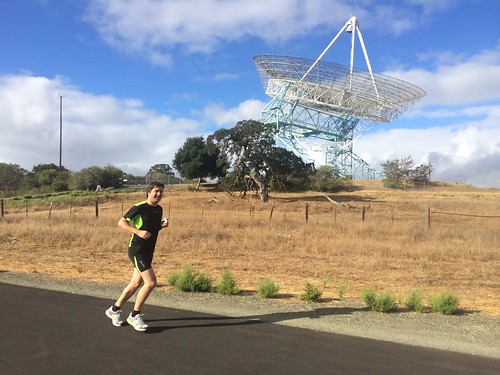 Despite all the alcohol we both woke up relatively refreshed the next morning and decided to start with a run around the Stanford Dish Loop. I have written about this loop before on my blog, it’s still one of my favorite places to run in Silicon Valley. After a shower we packed our bags and had breakfast. Then we did a bit of corporate sightseeing, among others at Google HQ where we drove the Google bikes around the campu, and at the Apple HQ where we stocked up on supplies in the Corporate Store. 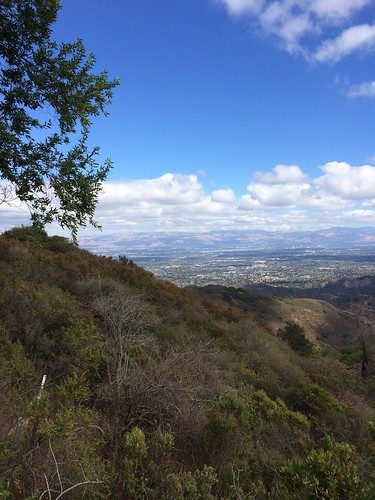 After those visits we decided to go back into nature and so we drove to the hills (among others Montebello Road above Cupertino with great views over the Valley) and explored the backroads through the vineyards. The original plan had been to drive to Los Angeles, but we eventually decided not to spend an additional 2 days in the car and just have a relaxed afternoon. We ended up at the Inn at Saratoga, a nice hotel where I had stayed before. 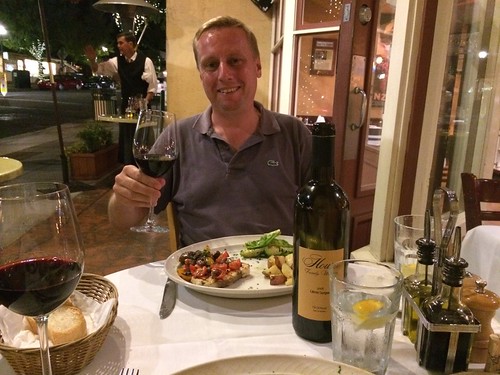 We had a fun evening in town with a swordfish dinner and some beers in the local bar, where people were singing karaoke, which reminded both of us of Shanghai. We did not stay too late because we decided to drive back to Canada the next day, which we indeed did. We now took the interstate (mainly I-5) which took us in about 17 hours from Saratoga to Vancouver, including several stops for lunch, dinner, and of course filling up the tank at gas stations. Luckily no speeding tickets (as far as I know)! Even this road was quite spectacular, especially the part in northern California and southern Oregon. I was happy to be home though, 17 hours is actually just too long to spend in a vehicle in one day (even with 2 drivers in a fast car with several stops). 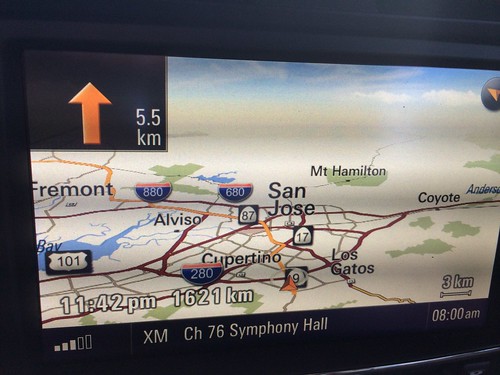 Looking back this was probably the best road trip I ever did. The feeling of total freedom, not knowing where you will end up each day, beautiful sceneries along most of the road, great conversations and discussions with a good friend for days in a row, a nice convertible, lots of good music, and great wines almost every day. It really can’t get much better in my opinion. I will have great memories of this epic trip for a long time to come!