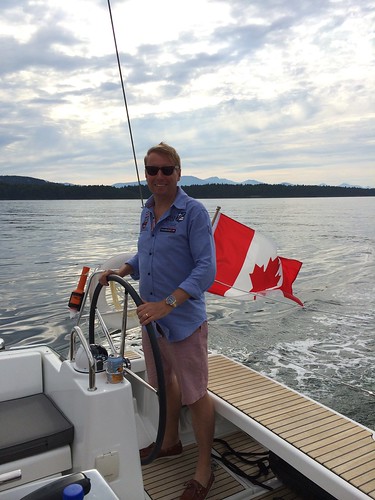 Last week we went sailing in the Gulf Islands in southern British Columbia. It was the first longer trip on my new boat Liberty and I had been looking forward to it. My sailboat is quite spacious, with 3 bedrooms and 2 bathrooms (the boat sleeps 8 people in total), so next to Grace, Scott and Elaine I also brought my parents along on this trip. 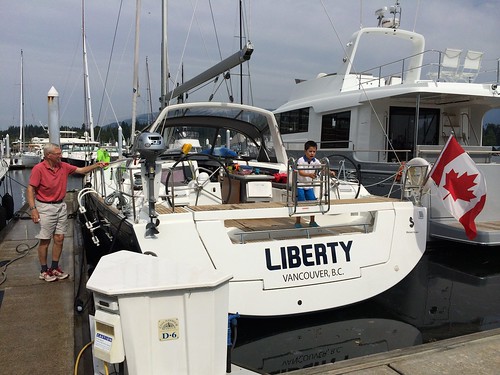 The original plan was to sail to Desolation Sound and spend a couple of days there, but the day we left the wind was blowing hard and exactly from the direction where we planned to sail, so we changed our plans just an hour into the trip. Instead if going north to Desolation sound we went west and crossed the Strait of Georgia to Galiano island.

There was more wind than I had imagined and there were a lot of waves once we were away from the mainland. Most of my family members did not feel too great, but luckily the boat is quite fast and within 3 hours we were on the other side of the strait where the conditions were very different. On the west side of Galiano the water was completely flat and there was hardly any wind. 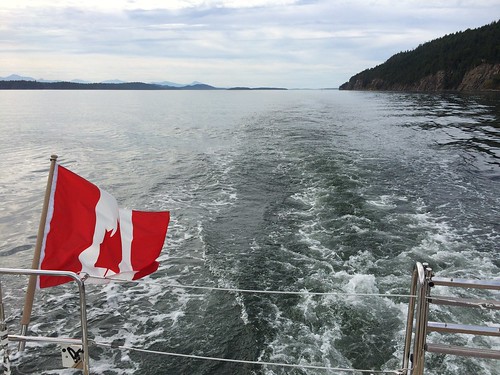 Then I suddenly realized that I did not bring any guidebooks nor official charts for the Gulf Islands with me, because we had not planned to go here. Luckily my chart plotter has all the charts I needed, so based on those charts and with a bit of Googling on my phone we decided to go to Ganges Harbour on Salt Spring Island. I called 2 marinas there, the first one (Salt Spring Marina) did not answer the phone but the second one (Ganges Marina) luckily did. They would close for the night before we would arrive but they still had a good spot for us. 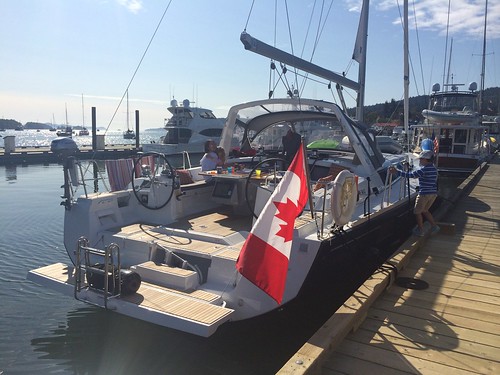 The marina was quite nice and they indeed had a big spot where other sailors helped us to tie up the boat. We then cooked a quick meal so the kids could go to bed early (they were very tired after a long day on the water), and after that I had a bottle of wine with my parents. 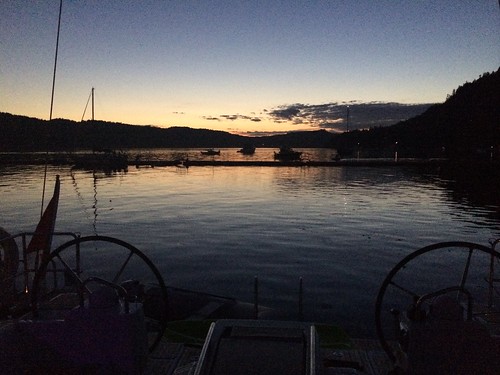 The next day we spent a lazy morning in the marina, we did some shopping and I managed to buy the official charts. At 1 pm we left Salt Spring Island and sailed south to Pender Island. There was not a lot of wind so we took it quite easy and ended up motoring the last part of the trip. 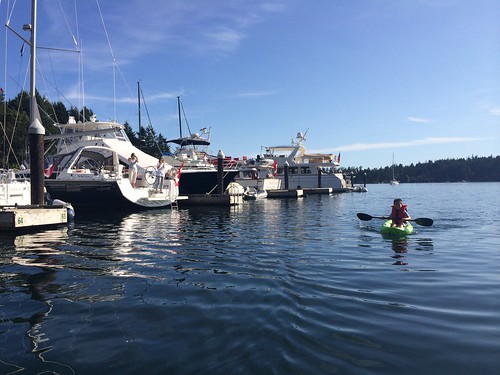 On Pender Island I had reserved space for the boat in Poet’s Cove, a nice marina that shares a pool and restaurants with a resort. Scott and Elaine went kayaking and I took the kids out in the dinghy. The water here is much colder than close to Vancouver, probably because of the proximity to the Pacific Ocean. I wanted to go for a swim but after just putting my feet in I decided to stay on the boat instead! 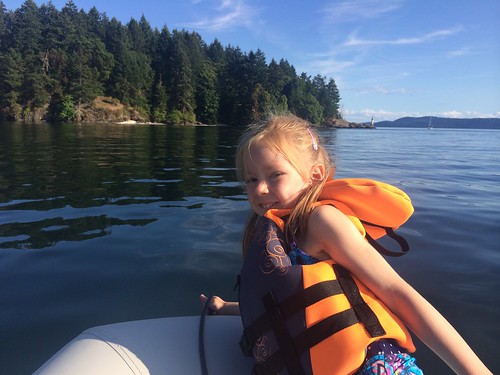 The third day we sailed to Sidney, which has a big marina with some nice boats in it. There was quite a lot of wind when I had to dock the boat and I was very happy that Liberty has both bowthrusters and a stern drive. Without that I am not sure if I could have managed it. We had a drink on the boat and then strolled through the town. I had been here once before but when you arrive by boat it always looks like a different place. I now noticed the many bookstores (the town is famous for it apparently) and was more interested in the boat stores than in the real estate agents (I always look at house prices when I’m in a nice place). 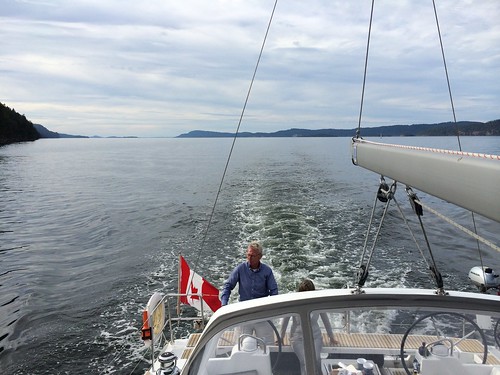 After a night in Sidney the wind had picked up even more. We had planned to sail to Victoria, but that meant we would have to go straight against the wind and the tide currents through an area with lots of rocks and shallow areas. Because we really wanted to go back to Victoria (where we spent a few days with the family in July) we decided to just motor there. That worked well and it was a nice ride. We among others passed by James Island, which is a huge private island with its own golf course and very nice beaches (and it’s for sale!). And we got to see the nice villas on Victoria’s waterfront from the boat, there are some great houses there. 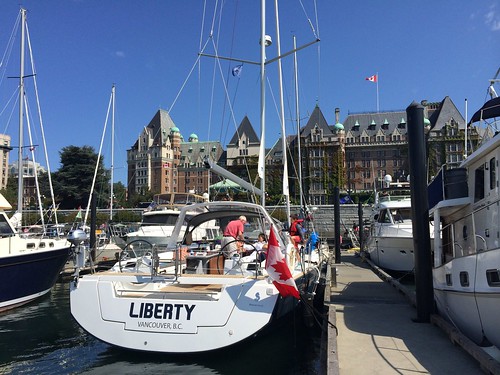 I managed to get a spot in Victoria’s inner harbour, right in front of The Fairmont Empress Hotel, where we stayed last month. We did a bit of shopping and sightseeing and then ended the day with a good meal in a seafood restaurant. After the kids were in bed we had a drink outside on the boat while watching the sunset. 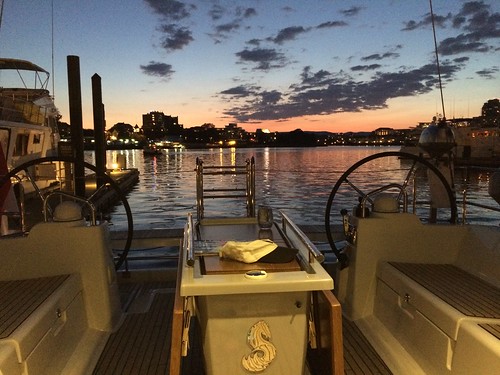 I really enjoyed spending a few days on the boat, but because of business obligations I had to go back to Vancouver. So on the last day we left quite early to take advantage of the currents and sailed and motored in just over 10 hours from Victoria to Vancouver. Most of the trip back the autopilot sailed the boat for us, so we could enjoy a book or just look at the natural scenery. 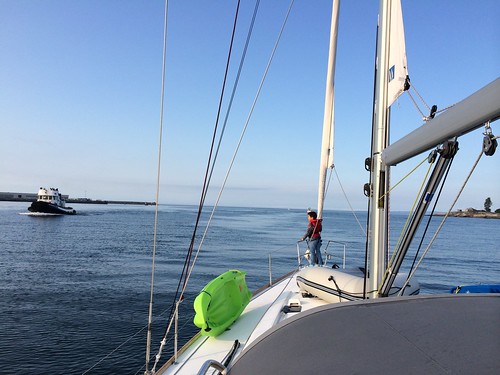 The Gulf Islands are incredibly beautiful and there are hardly any other boats. In Holland such an area would be filled up by people on their sail- and motor boats, but here you hardly see anybody else. I am happy that I have now explored this part of British Columbia a bit, I will certainly be back! 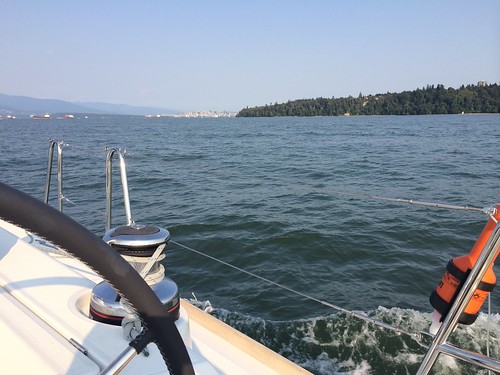