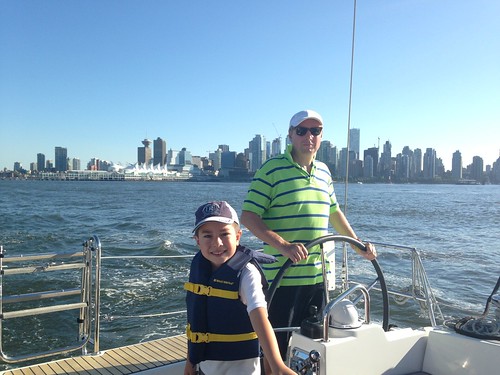 Every summer the Celebration of Light takes place on English Bay in Vancouver, a fireworks festival in which country teams compete to create the best fireworks show. Last night it was Japan’s turn and we decided to check it out with visiting friends from Seattle. Because hundreds of thousands of people were expected to show up we decided to take our boat and watch the show from the water. 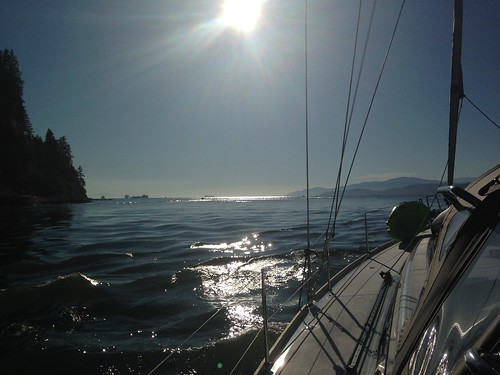 We left the marina just after 6 pm and drove the boat under the Lions Gate bridge and around Stanley Park to English Bay. The currents in the First Narrows just before the Lions Gate were very strong and a 70 foot motor yacht ahead of us was pushed off its course several times. Our boat was less affected (likely because we have a deeper keel?), but I had to work hard at the rudder to keep it going in the right direction. But after the bridge it was easy sailing again. 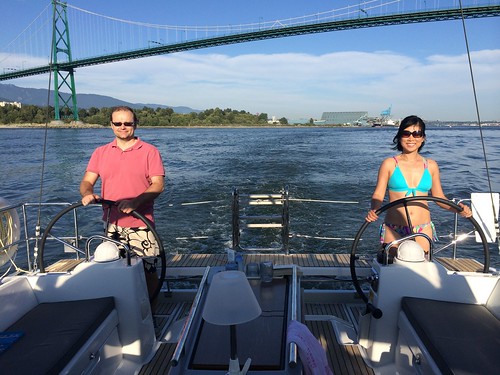 The weather was fantastic, about 30 degrees Celsius and a clear blue sky. There was a bit of breeze to cool us off, but the sea was almost completely flat. Surprisingly there were not a lot of boats on the water. 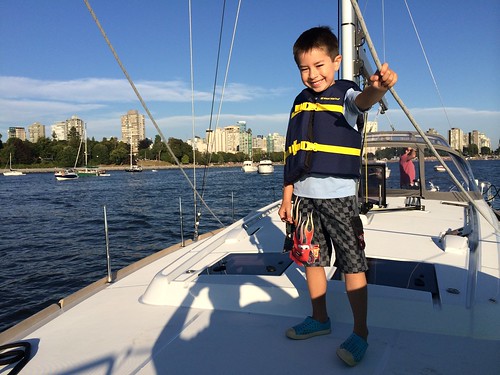 We decided to go straight to the place where the fireworks festival would be held to find a good anchoring spot. We found a really good place close to the fireworks barges and put the anchor out about 200-300 meter from the beach. 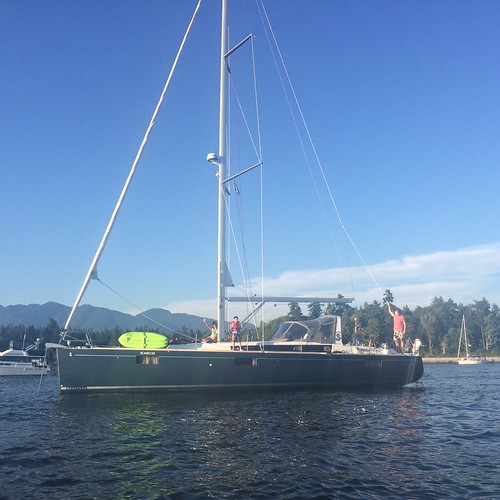 The beaches in downtown were very full already, in order to get a good viewing spot you have to be there many hours in advance. And they kept on getting fuller and fuller, I read this morning that a total of 350,000-400,000 people watched the fireworks last night! 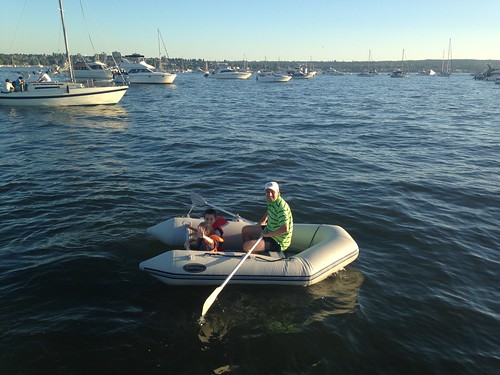 After anchoring we went for a swim and we lowered the rubber dinghy into the water. The water was warm enough to swim, so that was a good way to cool off a bit. 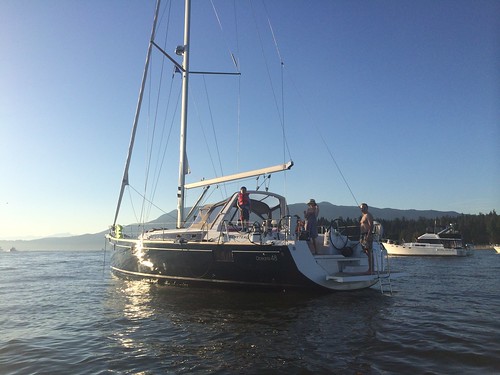 Scott wanted to go kayaking, so I also put his small kayak out. Because there was a bit of a current (tidal currents) I put a long line on his kayak so we could always pull him back in if needed. 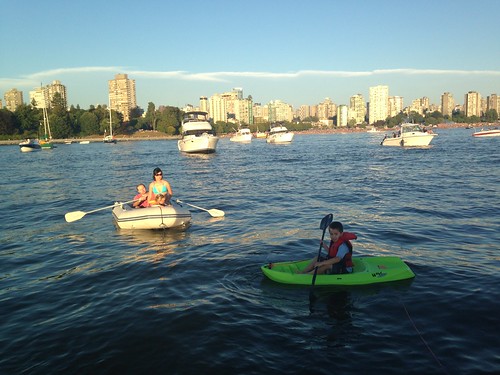 Around 8 pm I took a quick shower and then we had dinner. Lots of boats had barbecues on board, and the smell had made us all hungry. Among others we brought sandwiches, salads, quiche and soup, and we ate it while watching the boats around us. More and more boats kept on coming, I was happy that I had moored early. I am not too experienced with anchoring my boat yet and the last thing you want is that the anchor does not set well and you drift against other boats. 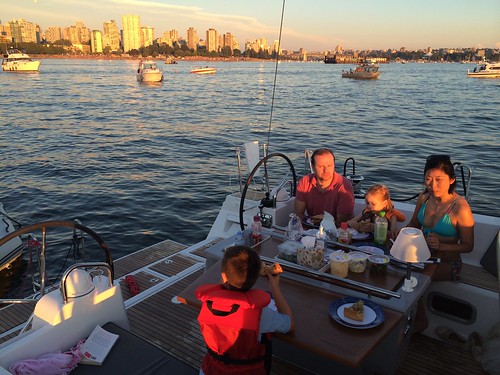 After dinner the kids played on their iPads and we talked and read a bit while it was slowly getting dark. 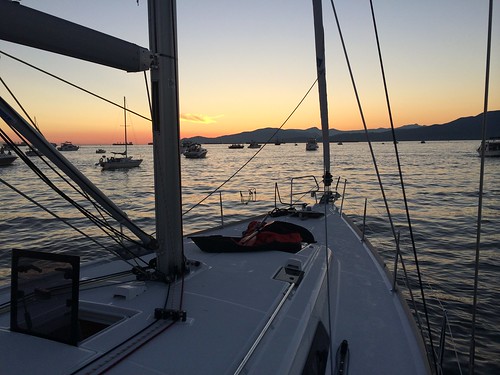 The sunset was beautiful over the water, especially with a drink in our hands and good music on the sound system. 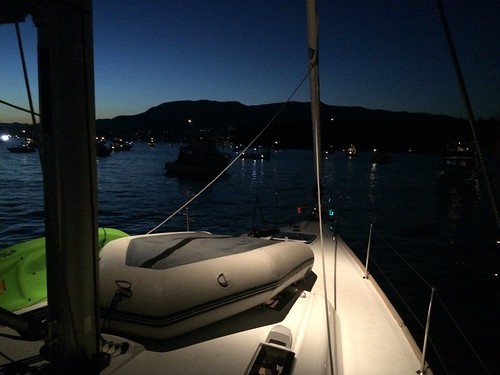 Just before the show would start at 10 PM we changed the music to a radio station that would broadcast the fireworks music. Each Celebration of Light show is synchronized to music, which makes it even better than a normal fireworks show. And I finally had a good reason to put my outdoor sound system really loud! 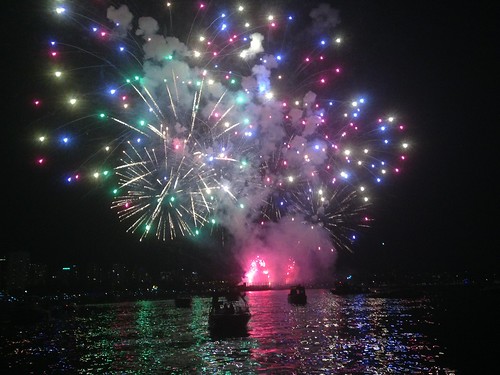 I am not an expert in fireworks shows, but I have seen a lot of them over the years and this certainly seemed like an extremely good one. It lasted about 25 minutes and it looked like the Japanese team used every pyrotechnic trick in the book. Of course being so close to the actual barges made it even better, you could even feel the pressure changes because of the explosions!

After the show most boats left right away, but we had another drink and waited until most of them had sailed off into the dark. Then we pulled up the anchor and slowly motored away. It was pitch dark and there were still some boats anchored, so we had to be very careful. 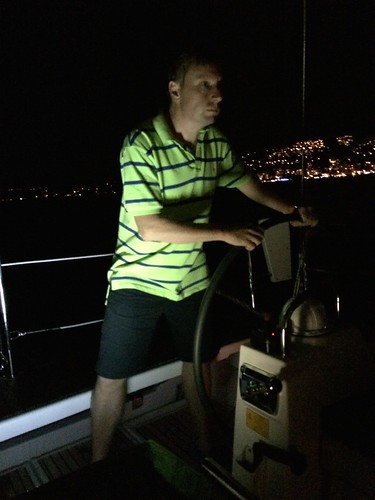 Once on the open water I sped up to about 9 knots, but I did not feel completely comfortable. I navigated on my instruments (you could not see a thing around you) and from experience I knew what areas to avoid, but I was worried that I might not see some of the other boats. Most vessels had the required lights on, but there were a few smaller ones that did not seem to understand how dangerous it is to sail without lights. And many of those smaller boats did not show up on my radar either, so it was kind of dangerous. Isabell offered to sit at the front of the boat and look out for other vessels. Glad she did because she indeed had to warn me twice of ships that I had not seen yet. 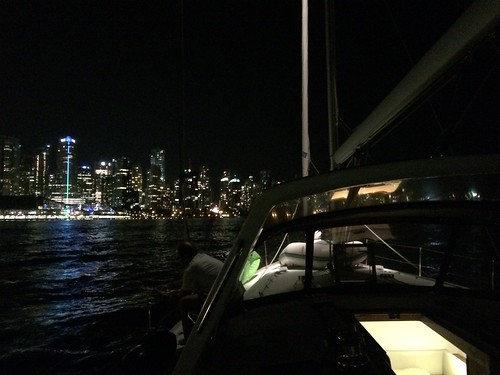 There were quite some waves on English Bay and in First Narrows, mainly caused by speed boats, but we made it back safely. Around 11:30 we were back in the marina, packed our things and drove home. Elaine had fallen asleep during the boat ride back already but Scott was still wide awake. At home I put Scott to bed and then Marcin and I ended the day with a few beers at the pool. It had been a great night on the water!