A couple of weeks ago the Sea to Sky Gondola started its operations, a new cable car just outside of Squamish that opens up a new high altitude hiking and snowshoeing area next to the Stawamus Chief. I heard good things about it, but I was a bit worried that it would be very busy on a weekend (some blogs were saying that waiting times for the gondola were 45 minutes on weekends). However, because the weather was very nice (30 degrees Celsius!) and my family-in-law is visiting we decided to go there anyway. 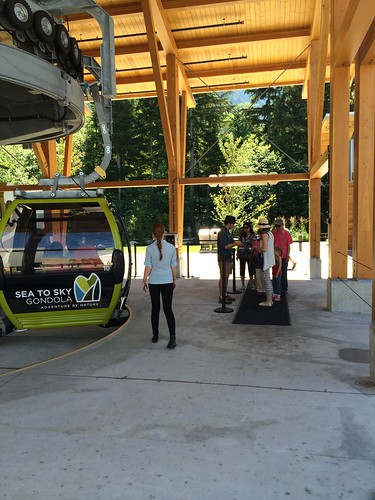 It turned out that it was not busy at all, the parking lot at the gondola entrance had a number of empty spaces and there was no line at all at the gondola. I think the weekend lines may have been due to the fact that the gondola had just opened and many people wanted to try it out. My family bought tickets to take the gondola but I decided to run (actually, mainly hike and climb) up the newly built 1o km Sea to Summit trail to the top at over 900 meters altitude. 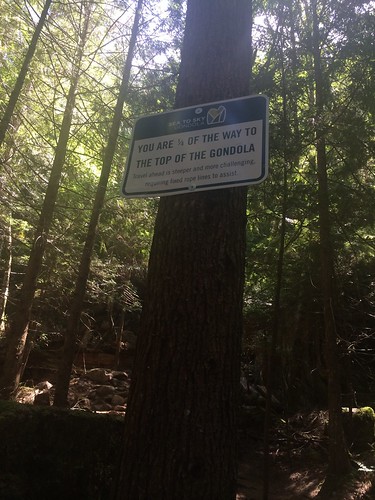 The trail starts right behind the parking lot and merges with another trail after a few hundred meters. At that point the path got really busy, but I soon found out that these were all people hiking up to Stawamus Chief and not to the top of the gondola. After about 20 minutes the Sea to Summit trail turned to the right, following the Shannon Falls trail, and it was quiet again. 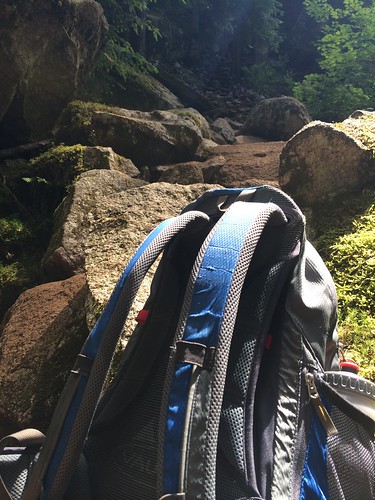 The Sea to Summit trail is similar to the Grouse Grind in terms of its vertical distance, but where the Grouse goes up 900 meters in less than 3 km, the Sea to Sky takes 10 km for that. A large part of the trail is relatively flat, meaning that you can recover easily, which is never the case on the Grouse Grind. But part of the trail is very steep as well and reminded me of the Grouse, I even had to climb over rocks using both my hands (on Grouse that’s hardly ever needed, only when it rains or when it’s freezing). The Sea to Summit is not a trail you want to do with young kids! 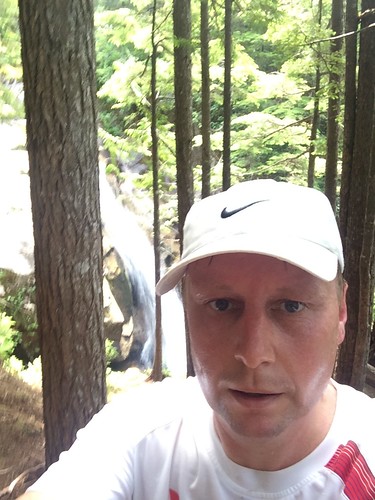 The Sea to Summit has some beautiful sights along the trail, among others the upper Shannon Falls that are located about halfway to the top. I heard the waterfalls from far away already and was happy that the trail passed by them so I could check them out. 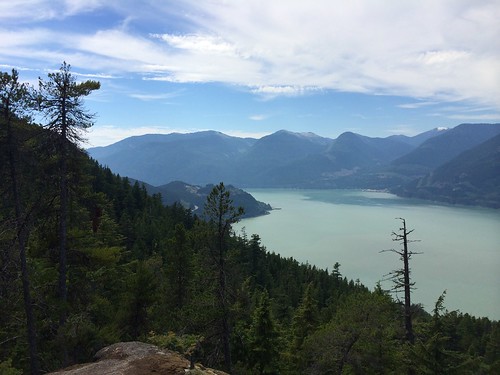 Ten minutes past the Shannon Falls is a great viewing area, where you can see Howe Sound and part of Squamish. It’s a good place to rest before tackling the final 3-4 km to the top. I just stopped for a minute for another drink: I was dehydrating fast because of the hot weather and kept on drinking water during the work-out. 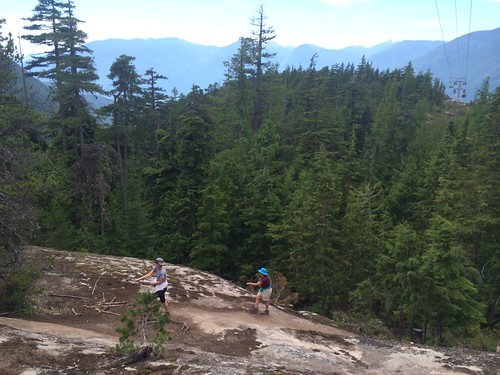 At the final part of the trail I took the Wrinkle Rock trail shortcut, which is about 1 km shorter than the normal route but also a lot more difficult. You have to go over some rocky terrain where the fixed ropes (see picture) are needed to get to the top. From there it’s another 20 minutes of relatively steep trails through the woods to the top of the gondola. 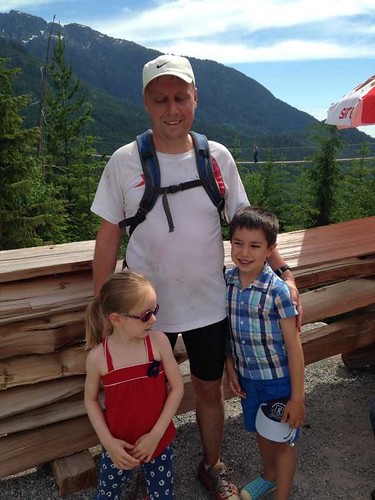 After 1 hour and 57 minutes I arrived at the summit where Scott and Elaine were waiting for me. I was completely exhausted, not only because of the long and quite difficult trail, but especially because of the heat. 30 degrees Celsius is actually too hot for a hike/run like this and I drank about 2 liters of chocolate milk, water and smoothies before I started to recuperate a bit. 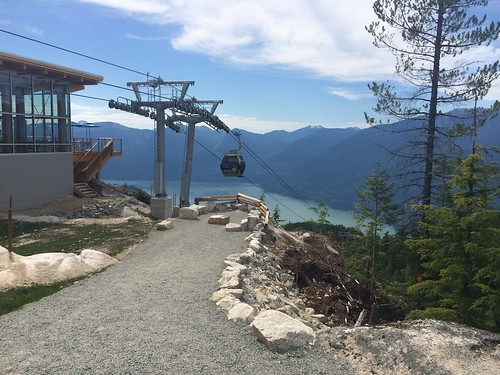 After about 15 minutes I felt good enough to walk around at the top and so I did a bit of sightseeing with Scott. The summit area looks great and the views are stunning. I think this may become an important tourist destination in the future. 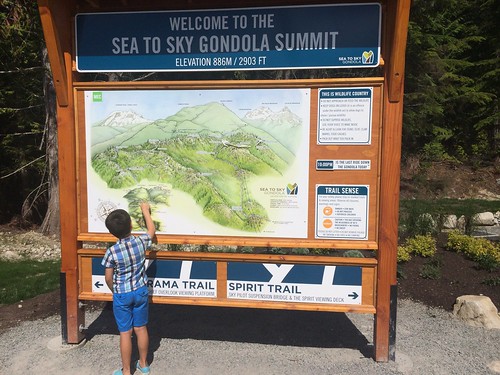 It’s also a good start for some new trails that were recently built. However, because it’s high mountain area you have to watch out where you hike: last weekend a hiker died after falling only 6 km away from the top of the gondola. Easier accessibility to the backcountry does not mean that it’s less dangerous. 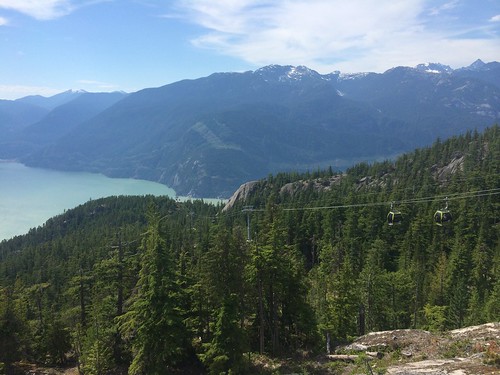 Although I was too tired to try any of the new trails (next time!), I did join Scott on the suspension bridge that’s close to the gondola. 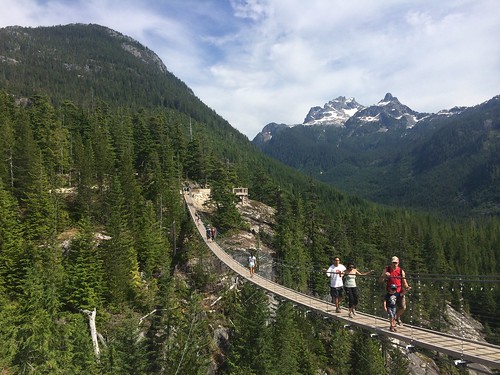 After that I joined my family in the gondola to go down to the parking lot again. I would not advise anybody to hike down if you’re tired already. The downhill fee for the gondola is only $10 (the same as on Grouse Mountain), so that should not be a reason to hike down. 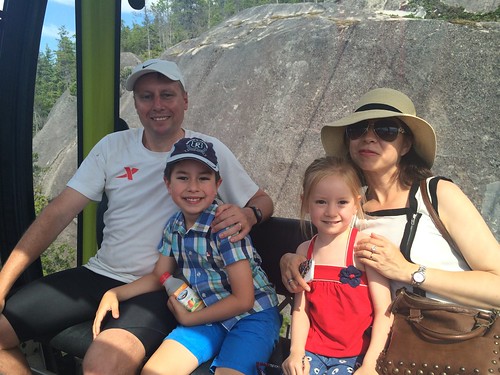 The Sea to Summit is a much nicer hike than the Grouse Grind, but also more time consuming (it takes approximately twice as long, my Grinds normally take 50-55 minutes). It only took me 30 minutes to drive home from the gondola station, so I think I will come back here more often. However, I’ll probably wait until it cools off a bit, in the height of the British Columbia summer it’s actually too hot to do a 2 hour outdoor work-outs.

Because of its proximity to Vancouver the Sea to Summit could become a competitor to the Grouse Grind, especially for weekend hikes (a 2 hour after-work hike instead of 1 hour, plus extra travel time, will be too much for most Grouse Grinders). So far there is no official timer yet like on Grouse, so you’ll have to time yourself, but once the hike becomes more popular that may come as well. I’m looking forward to doing this one a couple of times per year!