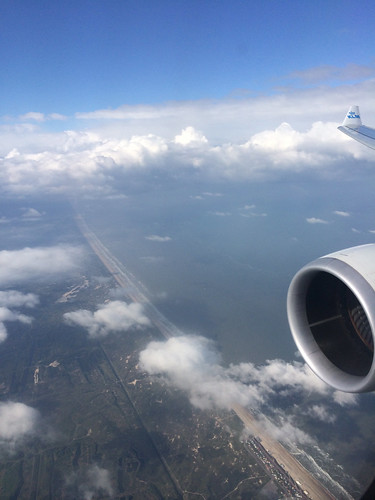 Flying over the Dutch coastline

I am a big fan of financial tech, especially technologies that will disrupt the current financial system. For that reason I went to the peer 2 peer lending conference Lendit2014 in San Francisco 2 weeks ago, where it became clear to me that p2p lending has really made a breakthrough over the past year. Banks and funds are entering the market, by investing in it and by inventing new products (e.g. securitization of loan portfolios).

But where p2p lending (started around 2007) already made its initial breakthrough in finance, Bitcoin (started in 2009) still has some work to do. I personally believe that Bitcoin and its related technologies will have a much bigger impact on the financial world than p2p lending, but because it’s more difficult to understand and more controversial it takes longer to take off.

Over the past year I probably spent almost half my working hours on bitcoin and bitcoin related things. This includes looking at companies’ business plans, reading most bitcoin related blogs and going to bitcoin conferences. Over the past days I went to 2 conferences in Amsterdam, the inaugural Dutch Bitcoin Conference and the global Bitcoin Conference, organized by the Bitcoin Foundation. I spoke at both conferences.

The Dutch conference was held at ABN AMRO, probably a first for a bitcoin conference to be organized at a bank. Banks are still very wary of bitcoin, which is logical because if bitcoin breaks through it will be a huge risk for their business and they probably see that by now. So it was great to talk about bitcoin at a bank’s facilities and to hear banker’s views as well. 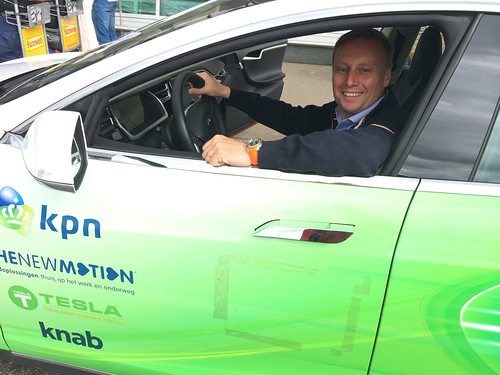 Tired and jet lagged in a Tesla

The Dutch conference was organized in just a few weeks by Rutger van Zuidam and Vincent Everts, 2 well-known trendwatchers and serial entrepreneurs in Holland. Vincent picked me up at the airport when I arrived, let me drive his Tesla to my hotel and immediately did an interview that he recorded while I was driving. The fact that I was jet lagged after a long flight did not play a role 🙂

It’s quite something what Rutger and Vincent pulled off in this very short time. They managed to get top speakers on board such as Dutch former finance minister Jan Kees de Jager, Mike Hearn of the Bitcoin Foundation, Bitcoin economist Tuur Demeester, and even a representative of the Dutch Central Bank. Despite the short time they had the conference was sold out and there were not even enough seats! There was also a lot of Dutch press representatives: TV stations, newspapers and several bloggers were present at the event. 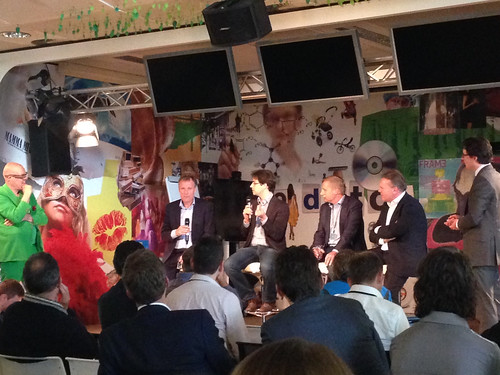 The level of the discussions and conversations at this conference was quite basic, because for most participants and bankers bitcoin is still something they need to learn about. But it was a good introduction for them to learn what bitcoin is and how it might change their world. The basics of bitcoin were discussed and everybody even received some free millibits (a fraction of a bitcoin).

I had a great day at the conference, spreading the bitcoin gospel and talking to many people that I had not seen in years. Vincent Everts interviewed me on stage about my view on bitcoin and investment opportunities and I participated in a panel with 2 bankers and with Tuur Demeester. The panel was interesting but too short, it would have been good if we had been able to discuss a bit more about the potential of bitcoin for banks. 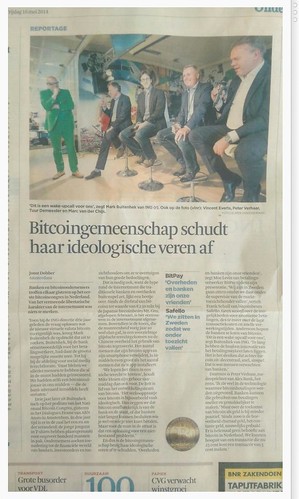 My main conclusion at the end of the day was that there is no real need for bitcoin yet in well-developed countries like The Netherlands where everybody has a bank account and where mobile and Internet payments are very easy. The real growth will come from the developing world, and after innovation there, bitcoin will likely change the financial system in the Western world as well.

During a TV interview with RTL I decided to talk about the price. I strongly believe that once hedge funds, PE funds and pension funds can start investing in bitcoin (through ETFs for example) the price will explode. A 10x price increase to USD 4000-5000 would be quite possible, because these funds will put tons of money and the bitcoin float is still very low. Among my friends who watched it several afterward asked how to buy bitcoin! 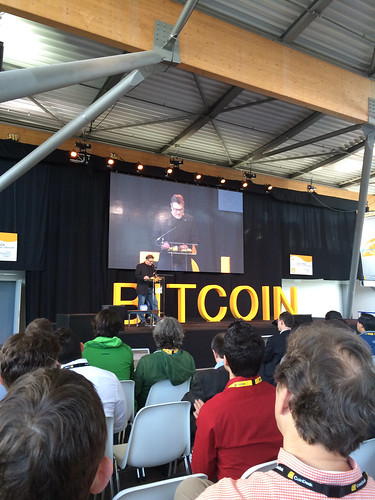 The main program of the Bitcoin Foundation’s conference Bitcoin2014 took place on Friday and Saturday. In total about 1200 people from 50 countries flew to Amsterdam to attend the event. It was probably the best bitcoin conference that I have been to so far, mainly because almost all the top speakers were there and the level of presentations and conversations was very high. I learned a lot during the 2 days and I met a lot of people that I had only known virtually so far. 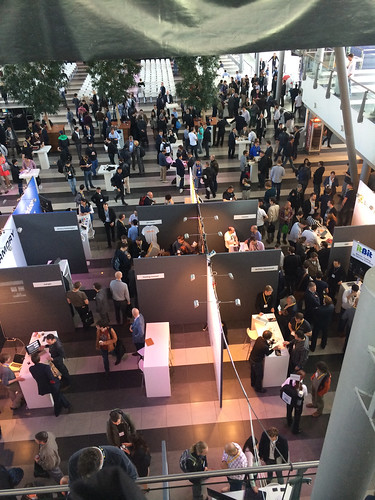 Before the opening of Bitcoin2014

The highlights for me were Gavin Andresen‘s State of the Bitcoin 2014, his annual speech about the core development of Bitcoin and some risks that need to be discussed (esp. the block size is a potential problem that might lead to higher transaction costs), and Circle’s product launch. Circle.com is the first bitcoin exchange/bank that is not only very easy to use (you can even transfer funds to and from your credit card!) but that also insures your bitcoins in case they should lose them or get hacked (Circle holds your private keys, which is likely what the masses will want). There were tons of other good sessions, but many are too difficult to talk about here. 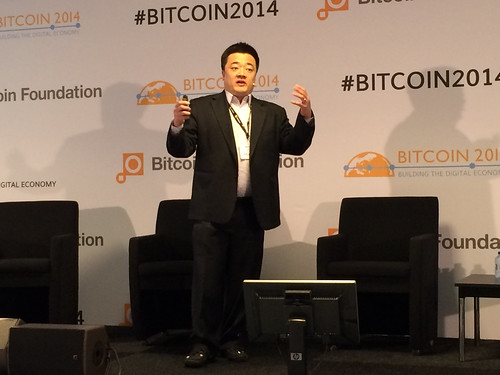 Another session I enjoyed was Bobby Lee‘s presentation about bitcoin in China. Main take away is that even though the PBOC (China’s Central Bank) prevents banks to work with bitcoin and bitcoin exchanges, people keep on finding ways to trade bitcoin, it’s unstoppable. Roger Ver mentioned later that last weekend’s bitcoin conference in Beijing was a huge success, despite the fact that the press and all websites were told not to report on the conference (the CEOs of the bitcoin exchanges were not even allowed to speak there!). It’s a real pity that China is trying to stop bitcoin, but in a way it’s understandable (they want to control everything and bitcoin got out of control for them). I hope they don’t shoot themselves in the foot when bitcoin will break through. 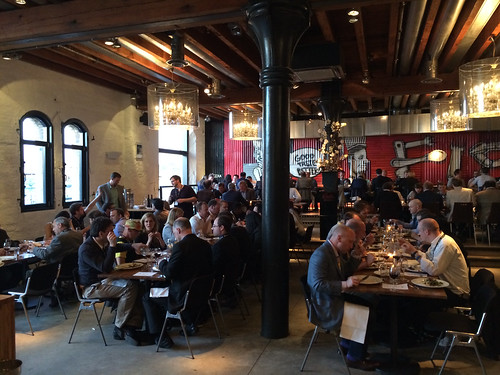 I also participated in a panel about bitcoin investment opportunities, which I really enjoyed. The New York Times journalist Nathaniel Popper led the discussion with Roger Ver (Bitcoin Jesus), Nick Shaleck (Ribbit Capital), Steve Waterhouse (Pantera Capital) and myself. Among others we talked about centralization vs. decentralization, the price of bitcoin, and new ideas for killer apps. A detailed write-up of the discussion can be found here on Coindesk. 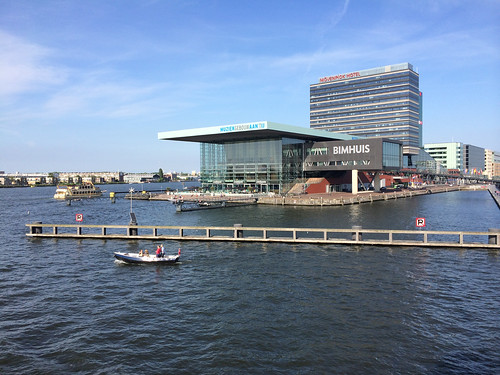 I had a great time in Amsterdam, although I probably should have stayed a few days longer. Luckily I did not have a real jet lag this time (despite the 9 hour time difference between Vancouver and Amsterdam), but I will need to catch up on sleep over the next 1-2 days. I even slept on the plane for a couple of hours just now (I am writing this while flying home), which is unusual for me on a daytime flight. 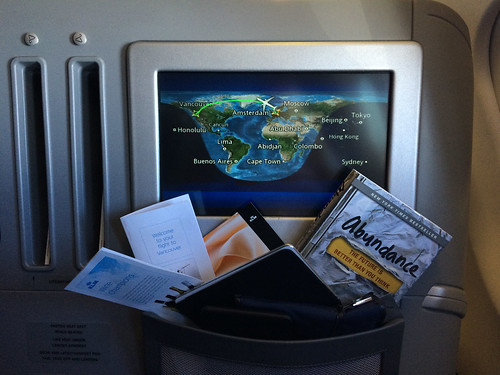