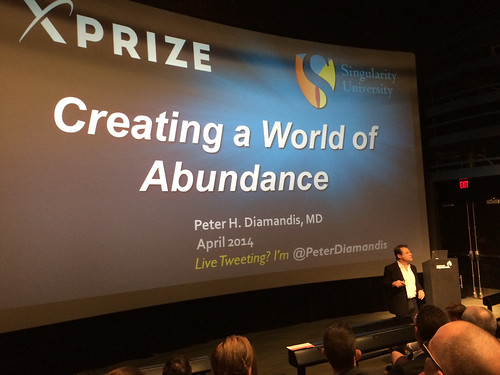 Earlier this week I was invited to a talk by Peter Diamandis at the Vancouver Aquarium (thanks for the invite Praveen). I read a lot about Peter and his activities over the years but I had never attended one of his talks, so I was very excited to see him in real life.

In case you don’t know Peter Diamandis, he is a well-known serial entrepreneur who among others co-founded companies like the X Prize Foundation and Singularity University. He is both an engineer (MIT) and a physician (Harvard) who thrives on disruptive technologies that can change the world and outer space. And he is a great speaker!

The event was extremely inspiring to me and was probably among the best presentations that I have ever seen because of the topics he discussed. It’s one of those talks where I could imagine that one might end up quitting his/her job right after the presentation – at least when you happen to work for a large company in a job where you are not doing anything that could potentially change the world. I am lucky that in my daily business life I am able to make a difference in at least some of the investments that we do, but not nearly as much as Peter is doing.

In his talk Peter discussed 3 topics, Exponential Technologies, Incentive Competitions and Abundance. I will try not to go into too much detail, but just write down some of his statements and examples, and combine those with my own thoughts.

As a VC I see new ideas every day and I see the world changing around me, but most people are so focused on their daily lives that they totally miss what’s happening out there. Especially large companies underestimate the rate of change in technology, they think that they can keep up with their R&D, but that’s a big mistake.

A good example is the digital camera. The first digital camera was developed in 1976. Between 1976 and 2014 the resolution of a digital camera increased 1000 times, the camera has become 1000 times lighter and the device is 1000 times cheaper. That means that current cameras are 1 billion times better than the first ones developed. But the exponential growth does not stop here of course, technology keeps on improving so in a few years from now resolution, size and price will be many times better than they are today. Fascinating!

The same thing you see with sensors, they are so cheap and small nowadays compared to just a few years ago, that they can be used for things that nobody thought of before. Artificial intelligence and robotics are other examples where you see exponential growth. My kids may never need to get a driver’s license because by then all cars will drive themselves. Is that boring? No, not only does it save you a lot of time (it’s like having a private driver, something I sometimes miss from China), but autonomous cars can race as well as you can see in this YouTube clip.

Artificial intelligence develops so fast that supercomputers like Watson can now easily win game shows like Jeopardy from human beings. Last month at SXSW Watson was given 35,000 cooking recipes and information about 1000 chemical flavor compounds. Based on this it created amazing recipes, for example with unusual combinations of chocolate, coffee and garlic. A normal chef would likely never try these, meaning that Watson is in a way more creative already than expert human beings. And this is just the beginning!

Peter gave 5 critical insights that he discusses with multinationals that are spot on in my opinion:
– The rate of innovation is exploding
– Innovation comes from everywhere
– If you don’t disrupt yourself, someone else will
– Competition is no longer a multinational overseas
– If you depend on innovation inside your company you are dead

So where do you source your innovation? Well, for example through incentive competitions!

I am not sure if Peter is the inventor of incentive competitions, but for sure he is the one who made the concept big with the X Prize Foundation. It basically means that you define a challenge and give a huge prize for the person who can first solve the problem. The first and probably most well-known example is the Ansari X Prize for the first team that would be able to send a 3 person crew to space (=at least 100 km altitude) twice within 2 weeks. The winner would get $10 million. The result: 26 teams participated and together spent more than $100 million, and within 8 years a team won the prize. In total there were 10 billion media impressions worth more than $120 million because of the competition! 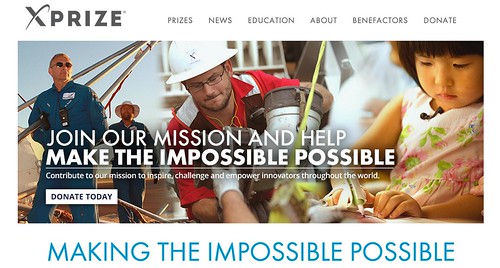 It turns out that giving a huge incentive can solve a lot more challenges that otherwise may be neglected, and that’s what Peter is working on with the X Prize Foundation. He focuses on big problems, for example putting people on the moon (the Google Lunar X Prize, $30 million dollar prize)or finding better ways to clean up oil spills (the Wendy Schmidt Oil Cleanup X Challenge, the winner improved the technology by a factor 6!).

Other examples of prizes that have been launched or will soon be launched are for example a prize to increase global literacy, a competition to make carbon dioxide from waste into an asset, one to predict earthquakes, and a prize to cure Alzheimer’s.

It’s amazing to hear him talk about these grand challenges. Big companies are not interested or not smart enough to solve these problems, but incentive competitions might do the job. They tap into the world’s smartest people and cost a fraction of what it would cost corporations to try to do this.

Incentive competitions can be used for both local and global problems, and for that reason Peter helped to co-found another company, HeroX. This business calls itself the world’s problem solving platform and already has quite a number of interesting ideas and challenges on it. It’s as simple as defining a goal, fund the challenge (through name sponsors for example) and others might solve the problem. I love the idea!

The third and final theme that Peter talked about was Abundance: the future is better than you think. This is also the title of a book that he wrote (and that I bought but did not read yet), in which he argues that the progress that we make in exponential technologies will allow us to make greater gains in the next 20 years than in the past 200 years. Every basic need of all human beings on this planet can soon be met and we will live in a world of abundance. 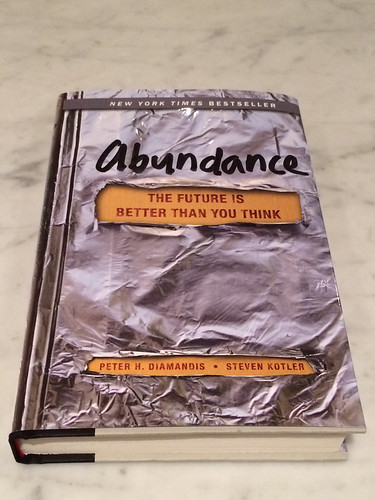 I tend to be a bit more pessimistic about whether we can achieve this, but according to Peter that is likely because of the negative tone in the media. He says that media are drug pushers: we are fed massive amounts of negative news, because that’s what people pay more attention to. The ratio of negative to good news is 10:1 according to him.

I feel we are on a downward slope in the way we rob our planet from its natural resources and hope it’s not too late to make changes. But Peter is very optimistic and is sure that technology will solve all problems.

Energy? The sun provides 5000 times as much energy as we need, we just need to find a way to tap into it. Not enough water? We are close to new technologies that can make salt water or even highly polluted into drinking water for just 1 cent per liter. Three billion people will come online in the next 10 years and because of the Internet we will able to tap into their collective minds to find solutions for the world’s problems.

I for sure hope he is right, and given his achievements he may very well be. It’s quite something what he has done in his life so far and he keeps on working on new things. Like I said at the beginning of this post, I am very inspired by him and I hope to learn more from him at a Singularity University program later this year.