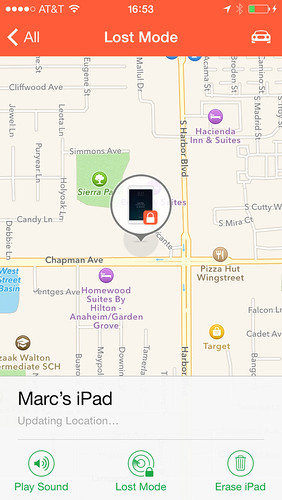 The Find My iPhone app

When we were staying in the Legoland Hotel 2 weeks ago I could not find my iPad mini. I looked everywhere for it, but it seemed I had lost it somehow. I knew I had used it the night before in our hotel close to Disneyland, but I was quite sure that I had not left it in the room. I used to travel so much that I have a standard routine of checking my hotel rooms before checking out and I normally don’t forget anything.

Luckily I had the Find My iPhone app installed on my laptop, so I ran it to see where my iPad was. Turns out it was still in the Hyatt Regency next to Disneyland. I had not idea how I could have missed it and I questioned Scott whether he had hidden it somewhere. He had done that once with my iPhone: I thought I lost it in Whistler but he had hidden it in his playroom and had totally forgotten about it.

I remembered using the iPad before going to sleep the night before. I normally read the New York Times from the next day (that’s the advantage of living in the Pacific Coast time zone) and that’s what I did there as well. But I could not remember what I had done with it after that. 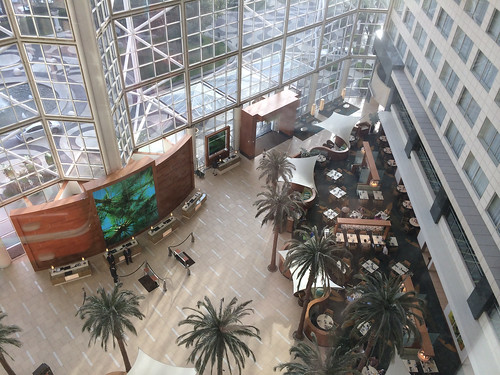 I called the Hyatt Regency to check whether they had found the iPad, but they said the cleaning staff had not seen it and there was no iPad at lost and found either. I normally tip the cleaners well (also when leaving the hotel), so I hoped that they would hand in an iPad that they would find.

With the Find My iPhone app you can play an alarm on the iPad, but because it was quite late already I decided not to do that. New guests had checked into our suite already and I did not want to wake them up or scare them late at night.

The next morning we called hotel security again and they sent someone to the room. There were no guests present in the room, but the security person did not want to enter. He listened at the door while we played a sound on the iPad, but he said he did not hear anything. My app, however, showed that the iPad was still in the hotel and very likely still in our room (the app is quite accurate with the location).

I decided to forget about it, but when the kids were in bed at night I started to play the sound again remotely. From about 8 pm to 10 pm I played the iPad alarm every 15 minutes, but nobody seemed to hear the device. I put a text on the iPad screen as well, offering a $100 reward to the person who would find it (in case the cleaners had found it and had hidden it this may be an incentive to hand it in).

The next day we drove to Palm Springs. I could see on my iPhone that my iPad’s battery was draining quickly, it was below 10% during the drive and less than 5% after we arrived in Palm Springs. I had sort of given up on the iPad and wanted to remotely wipe all data and apps from the device before it would be completely empty. But right before I did that I decided to let the alarm sound one more time.

Three minutes later my wife’s phone range and guess what: someone had heard the sound and found the iPad! A woman from Florida had checked into our former room and heard a sound coming from the room safe. Turns out that the iPad had ended up against the back wall of the safe, and I had not seen it while emptying it. The safe had been closed the day before, so security could not hear the sound. 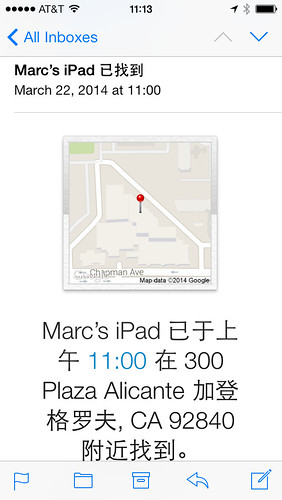 My iPad was found!!!

I was very happy, especially because I had almost given up on the device. I offered the finder the $100 reward, but she said she was not interested in that and was just happy that I had my iPad back.

By sheer luck my parents had just landed in Los Angeles and would drive by close to Disneyland the day after, so I gave them a quick call. They did not mind to make a short detour and picked up the iPad for me the next day.

When I installed Find My iPhone a while ago I didn’t really think the app would be very useful, nor that I would ever need it. But it turned out to be the most ‘valuable’ app that I have, because without it I would have lost my iPad.

I was thinking about changing my iPhone and iPads to Android devices because of Apple’s rejection of all Bitcoin wallets (I hate Apple because of this and think they made a huge mistake), but after this experience I have become a bit more reluctant to change. Does Android have apps like this? I assume they do, but do they work as well as Apple’s own app? I have tried to switch to Android several times already over the past years (and some of these attempts are recorded on this blog), but so far I always went back to Apple.

Interestingly, after losing my iPad mini and finding it back I started using it more frequently. When you don’t have something you suddenly realize the value of it. I mainly used it for the New York Times and occasionally for Twitter, Facebook or to try out a new game. But now I also put NextIssue on there (Netflix for magazines) and I synced my Spotify playlists with it. Last night I was on a flight from Vancouver to New York and spent half the flight reading magazines on my iPad while listening to Spotify!

If you have iOS devices and don’t have Find My iPhone installed, do it right away. It’s free and it just works!