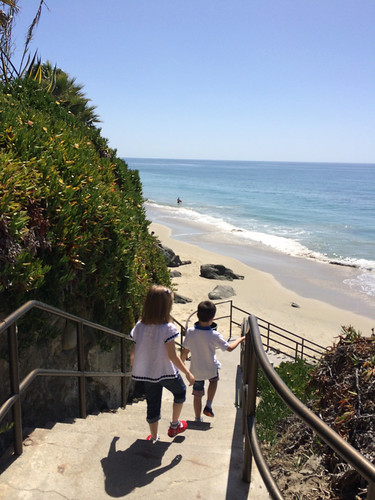 Last year we stayed home during Spring Break, but this year we decided to take the kids to a warmer destination. We decided on California, because it’s in the same time zone as Vancouver and the flights are relatively short. 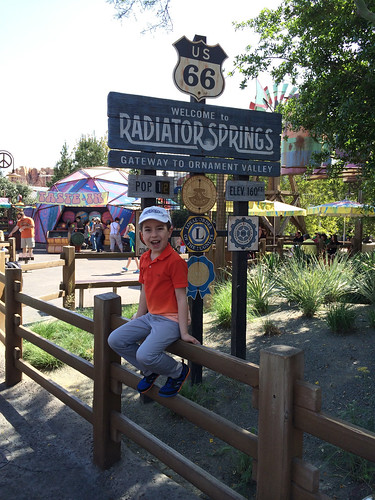 Scott’s favorite part of the park was Cars Land

I personally like the California Adventure better than Disneyland. I had been there a few years ago with my sister during a road trip in California, and since then the park had grown a bit and now also includes Cars Land (from Scott’s favorite Disney movie Cars & Cars 2). 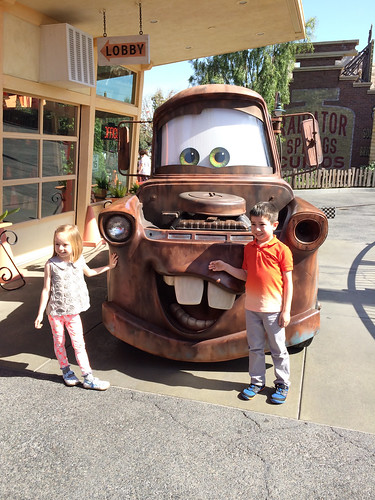 Scott and Elaine with Mater

What surprised me is how many obese persons there were in the park. Not just overweight, but really obese, in the sense that many of them needed an electric scooter to get around the park. So many people were using these things that it almost became normal to ride on one. Good for them I guess, but it’s kind of shocking to me. This kind of obesity is still a typical American thing (mainly thanks to the food and sedentary lifestyles), but I see a trend towards it in Europe and in China (especially with spoiled kids in one-child families) as well.

Because we booked quite late we could not get decent rooms in the Disney Resort anymore, but the Hyatt Regency where we stayed turned out to be a good alternative. Most people stay there for Disneyland, and the suite we booked had a bunk bed for the kids in their bedroom. They loved it, but it was a bit hard to get them to sleep the first night. The kids also loved the outdoor pool, so even after a full day in the resort they still insisted to go for a swim with me. 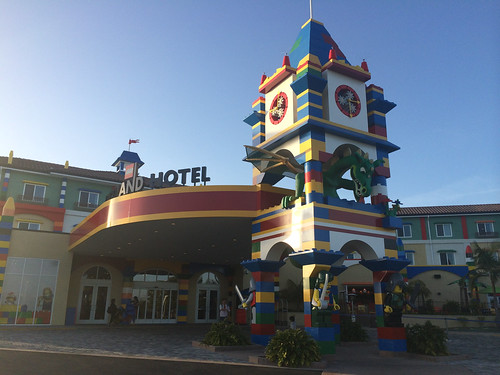 After Disneyland we drove along the coast on Highway 1 to Carlsbad for a visit to Legoland. There we stayed in the Legoland Hotel, which was a big hit with the kids. Not only was every room full of great Lego models, but there were Lego bricks to play with in the room and the kids had their own TV next to their bunk bed. Our room had a medieval castle theme, and the decoration was very well done. We had a room next to the pool, so the first thing Scott wanted to do upon arrival was to swim. If you plan to go to Legoland with kids you should consider to stay in the hotel, it’s next to the park’s entrance and your kids will be very happy. 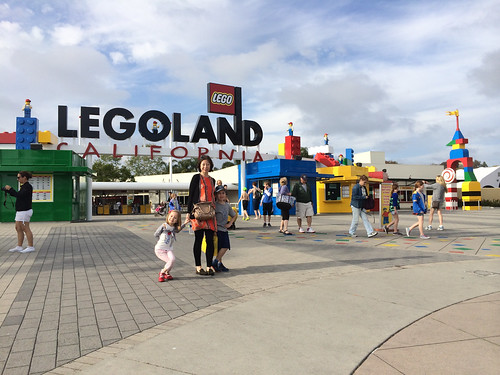 Legoland itself is very different from Disneyland. It’s a great park for young kids, but for parents it’s less interesting. Everything feels a bit less well maintained, especially after just spending time at Disney where everything is perfect. The attractions are not as good, but the park entrance fees are also a lot lower than Disney. For young kids it doesn’t matter, however, and Scott and Elaine had a great time. 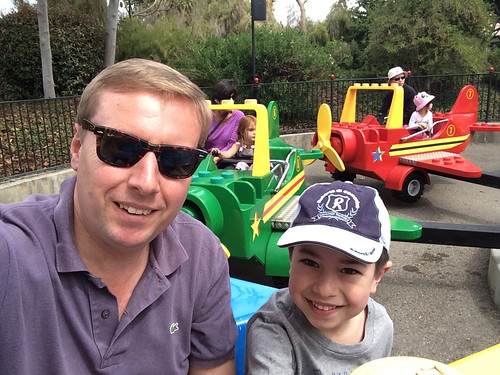 With Scott in one of the Legoland rides

After the 2 parks we drove to Palm Springs where we stayed in a villa with a nice pool. Palm Springs is one of those places that you either love or hate. 10 years ago I probably would not even think of going there, but right now I love it. The climate is great, 350 days of sunshine and it’s always warm (except maybe at night during the winter months). While we were there temperatures averaged about 28 Celsius during daytime, which I find very pleasant. 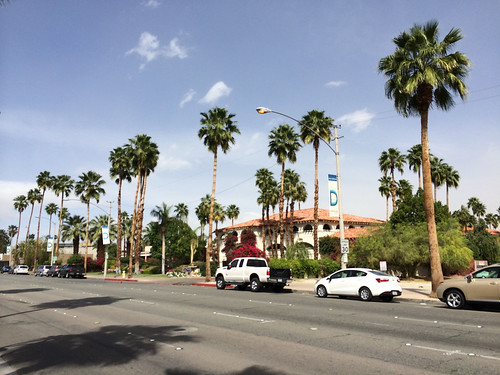 My parents also joined us in Palm Springs and it was nice to have them around. The main thing we did during the few days there was relax at the pool, play with the kids and have dinners in good restaurants. Palm Springs and Palm Desert have some very good restaurants, actually better than the restaurant scene in Vancouver (which is already not too bad). When the kids were in bed my dad an I often had a nice bottle of wine at the outdoor fire place in the back garden. 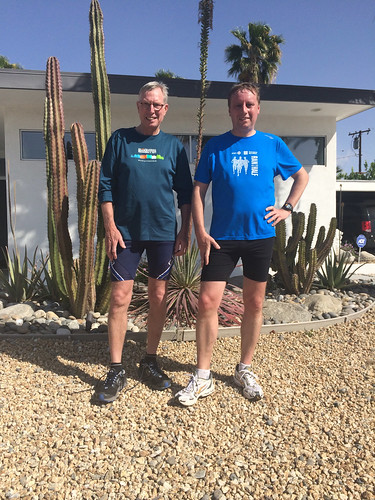 After running with my dad

We compensated the food and wine with some running. I found a nice 11 km route around the airport where there were hardly any traffic lights or side streets. My dad an I ran it a few times and one morning even ran the loop twice. Because Palm Springs is almost completely flat running was quite easy there, very different from the hilly courses that I normally run back home in Vancouver.

Grace went shopping a few times with my mom. There is a great designer outlet close to Palm Springs and El Paseo in Palm Desert can compete with Rodeo Drive in Beverly Hills. Lots of high end brands of course, but also a lot of nice galleries. We didn’t buy any art this time because Scott and Elaine are not big fans of galleries, but maybe we’ll do so in the future. The cars on El Paseo are great as well, there were more Rolls Royce and Bentley Convertibles there than I had ever seen before in one day! 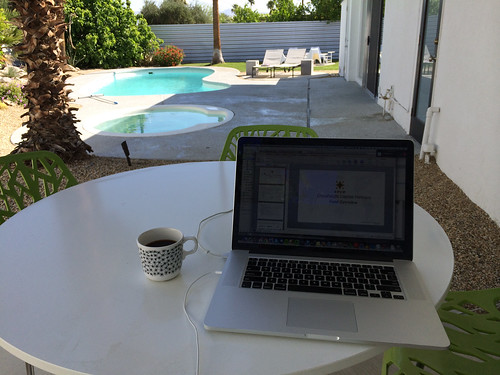 My temporary office in Palm Springs

I also did a bit of work, and created my own office in the shade in a corner of the backyard. From there I had a good view of the pool where the kids were normally playing, but they would not interrupt me too often. 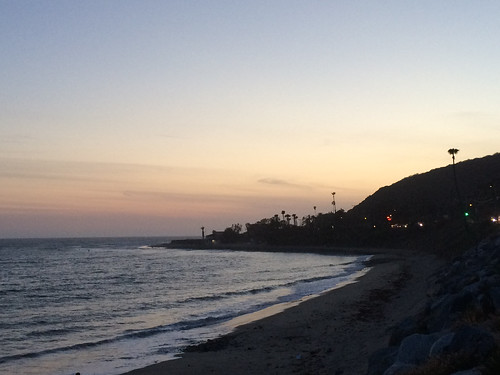 We flew back home again from Los Angeles and spent the last night there. In the late afternoon we walked around Marina del Rey and Venice Beach and later had dinner in Malibu, which has some nice restaurants and obviously great ocean views. It was a nice end of a great holiday!